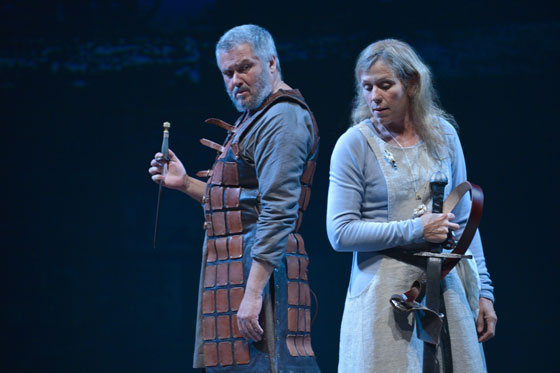 “Bubble bubble, toil and trouble” and for what? An evening of “sound and fury,” signifying, if not nothing, precious little.

Expectation ran high for Berkeley Rep’s visually stunning, starry production of Shakespeare’s Scottish play. Helmed by the great American actress Frances McDormand (“Fargo,” “Olive Kitteridge” and much more) and Olivier Award-winner Conleth Hill (aka the rotund scheming eunuch Lord Varys, spymaster of “Game of Thrones”), and directed by Daniel Sullivan (Public Theater’s Shakespeare in the Park), it was to be a theatrical trifecta, destined for triumph. But it turned out to be a rather pedestrian slog though the Highlands, with much clinking of swords at the end of the road.

So where did the train go off the tracks? Had to be the acting. McDormand, a little unsure of her lines on opening night, doubled as Lady Macbeth and one of the witches and I must say she was better in the latter role. She actually was a fabulous, creepy bearded witch. But her Lady M. had a flat affect, rather as though she was sleepwalking through the part. Maybe that is why her sleepwalking scene was the most effective of the night. She and Hill, who gave a decent, if somewhat bombastic reading of the thane who would become king, had utterly zero chemistry, either as husband and wife or partners in crime. There was no pity, no sorrow, no flash of passion that made you care about what happened to either of them.

Korey Jackson made a sympathetic Macduff but his performance too seemed lacking in power, especially after he hears of the slaughter of his family by the tyrant king. Speaking of that slaughter, it was one of the most affecting moments in the play: Mia Tagano and Young Leon Jones, as her son, provided a lovely interlude before their horrific murder. It really left you shaken. Other scenes, like the drunken Porter at the gate, well played by James Carpenter (who doubled as the soon-to-be-stabbed-in-his-bed King Duncan as well as the Doctor who tends to Lady M. in her psychological decline), went skillfully. The battle scene (directed by Dave Maier) also was effective. But these are side roads, moments, not the heart of the drama.

If there is a true star of this show it is the set, a stunner by Douglas W. Schmidt, brilliantly augmented by Pat Collins’ lighting and video design by the indispensable Alexander V. Nichols. The stage pictures presented by these three were truly marvelous.

But, alas, that’s not enough. As Shakespeare said elsewhere, “the play’s the thing” and unfortunately this one does not work very well.