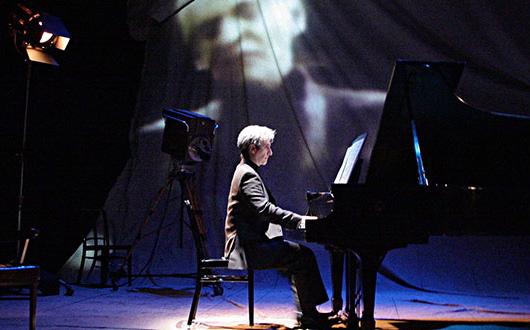 One of my favorite Stephen Sondheim lyrics is sung by a stripper with the improbable name of Mazeppa (he rhymes it with “shleppah”) in, of course, “Gypsy.” The song is titled “You Gotta Get a Gimmick” and it reminds me of pianist/playwright/performer Hershey Felder. He’s got a gimmick for sure and, with the possible exception of this critic, people seem to love it.

Felder, who sold out Berkeley Rep last summer with “George Gershwin Alone” and directed Mona Golabek, also in 2013 and also at Berkeley Rep in her runaway hit memoir “The Pianist of Willesden Lane” (which last I heard was headed to Broadway), is back, this time with “Maestro,” the life story — with music — of composer-conductor Leonard Bernstein. And, as far as I can tell, nothing much has changed. The piano is still center stage, rear projections show pictures from the era or illustrate whatever is supposed to be going on and the piano player plays and talks and plays some more. Seen one, seen ’em all.

Felder, who seems like a genial enough fellow, was much more simpatico as Gershwin, a genial fellow himself. He serves up Bernstein with a healthy dash of arrogance and a thick sauce of superiority. What you get on the plate is a kind of egomaniac stew, peppered with ambition so thick you could spread it on a roll. And he does it with a lot of grimacing and a strange supercilious accent. Adopting Bernstein’s own lecture/music format from the famed Omnibus television series that made him perhaps the most-viewed conductor in the world, Felder intersperses the biographical details with pedagogy, so you get a twofer, music education along with the show.

Spending an inordinate amount of time on the musician’s early life: the rigid, observantly Jewish father; the difficulty of getting music lessons; the relative obscurity of the early years in New York, Felder cherry-picks his way through Bernstein’s life, rushing through the early successes (“On the Town,” “Wonderful Town,” “Fancy Free”), giving a little more time to the spectacular struggles of “Candide” and finally coming to rest on “West Side Story,” the game-changing show that put Bernstein, as well as his collaborator, the young Sondheim, on the musical theater map.

More of the 105-minute, intermission-less show is given to Bernstein’s classical endeavors. His early cultivation of composer Aaron Copland which led to lessons with the famed conductor Dmitri Mitropoulos, which led to Fritz Reiner, whom he left for the more congenial Serge Koussevitsky, with whom he fell madly in love. This infatuation hints at the long-closeted bisexuality that will come out years later when he leaves his wife and children for another man.

But not before Felder departs on an extended riff on composer Richard Wagner that seems totally out of place in the general scheme of things. It does, however, give him a chance to play Wagner’s “Liebestod” backed by a gorgeous picture of Tristan and Isolde (projections by François-Pierre Couture and Andrew Wilder) as well as go off on Wagner’s notorious anti-Semitism. Oh yeah, it’s about love and how you can pursue love on your own terms. Well, it didn’t work out too well for Tristan and Isolde and it didn’t work out too well for Bernstein either. Within a year he is back with his wife, the beautiful Chilean actress Felicia Monteleagre, who proceeds to die of cancer. The last glimpse of the famed musician we get is at the end of his own life, sick, lonely and bitter about the cool reception his classical compositions have received (what about “MASS” and “Chichester Psalms” that are still in repertory?)

OK, it’s not exactly a Gershwin singalong but, judging from the standing ovation and the ecstatic comments of theatergoers as they exited, it’s going to be another cash cow for Berkeley Rep. Like I said in the beginning, you gotta get a gimmick.