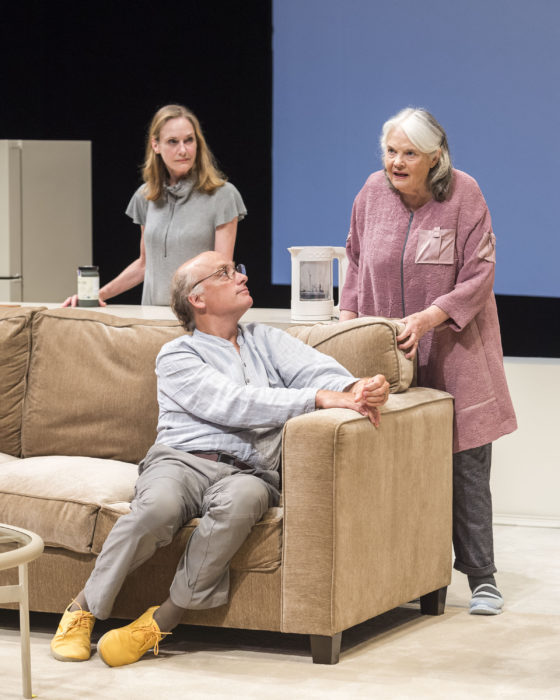 “If you can’t say something nice, don’t say anything at all” was the mantra of my youth, but that mantra does not serve a critic well. Looking forward to the opening night of “Marjorie Prime,” I thought, “At last Michael Ritchie, artistic director of the Center Theatre Group, is bringing something original to a Music Center stage rather than touring productions and rehashes of previous Broadway hits. Well, that was then and now is now. I am not so happy about the effort.

The set should have been a tip off. Monochromatically designed in motel beige, its job is to present the sterility of an assisted living facility. Eighty-five-year-old Marjorie (Lois Smith) sits in her Barcalounger; so far so good. But have set designer Mimi Lien or director Les Waters ever visited an assisted living facility? No pictures of family on the counter? No afghan hung over the back of the chair? Come on. This is partially about daughter Tess (Lisa Emery) worried about mom’s waning memory. Those things, the photos, the afghan, the silly memorabilia, are all standard cues. (Here, some might say, I should insert a spoiler alert but frankly all that was created by the following was a few moments of confusion, not artistic tension): Marjorie’s “prime” (substitute the word “avatar” and it makes sense), Walter, her deceased husband at age 30, is perched on the arm of the couch. He has been created by loving son-in-law Jon (Frank Wood) at the suggestion of the facility to improve Marjorie’s memory. Daughter and son-in-law have filled avatar Walter with information about the couple’s time together and he is further modified as Marjorie talks to him. Perhaps the name “prime” was to suggest “prime the pump” of memory. As welcome as that would be, do not expect this to be news of an Alzheimer’s breakthrough.

“Marjorie Prime” was commissioned by Playwrights Horizons in New York, which subsequently decided not to produce it. The Cleveland Playhouse then performed a reading which earned the following notice, “One can only question how this play of words and almost no action will translate into a full-scale production.” I could not have said it more succinctly. So why put it on at the Taper? I do not have a clue. Even though there is a dramatic event offstage, onstage the action never comes to life.

The friends-and-family opening night audience began by laughing excessively at the dialogue between Marjorie and Tess. There is enough of Marjorie left that one can imagine her acid tongue and sly humor. In dementia humor often persists even when memory is faded. However, the laughter soon faded and as the action on stage becomes as flat as the life Marjorie leads. Under Waters’ uninspired direction the actors’ voice projection is just as flaccid and flat. The bios of all concerned, starting with playwright Harrison, are impressive but not enough to save the day. Little evidence of those bios is seen.

We are all so involved with what technology brings us, it is only natural to expect tecchnology to be incorporated into every level of dramatic writing. If you want to see wonderful and imaginative writing, acting, and direction of a character interacting with a computer presence rent Spike Jonze’s Oscar-winning movie “Her.” Poor old “Marjorie Prime” is better left sitting in her Barcalounger.