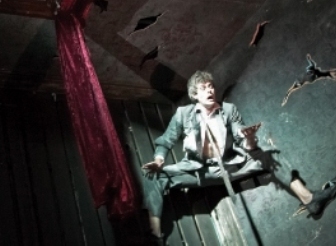 Most discoveries are basic, and simple, and Franz Kafka‘s discovery of the power of simple prose threw the loveseat out the window, or as the opening line of his 1915 story “Die Verwandlung” has it—“As Gregor Samsa awoke one morning from restless dreams, he found himself in his bed, changed into an enormous vermin.” Gertrude Stein and D.H. Lawrence had effected equally simple opening lines, but no one had let the genie out of the bottle in the last century with such deadpan force. What if I am not me as my little dog knows me, as Stein, paraphrased? But Kafka’s Prague-based traveling salesman has no such luck.

Would that this U.K.-Icelandic co-production, presented as part of BAM’s Next Wave Festival, had its collective feet planted firmly on the ground. But the problem here, as with so many post-modern takes, is not that the end doesn’t justify the means, but that the end result hasn’t that much to recommend it because the initial shock of Kafka’s tale has become institutionalized, and with so many horrors in store in the 1914-1918 war, this production reads as an ironically overstuffed and very well-made bourgeois play where everyone gets the joke. That, at least, was how this careful, and mostly literal mounting was like a determinedly “deep” take on things of great moment, by say, David Mamet, or Ibsen, who though no one ever says it, are, and were preaching to the P.C. choir of our day, and his. But Kafka was after something more elusive and troubling—the disconnect between people as the human condition—yet most of this fell between the cracks.

But what was one to make of the exaggerated line readings of Gregor Samsa’s family as things in the story went from bad to worse? Was this inept acting—the cast’s italicized pronunciations were almost camp—or just a concept gone south? And what of Börkur Jónsson’s set design, which looked like the Icelandic version of kitchen-sink realism, or was this the drab world of Britain’s 1950s angry young men playwrights like John Osborne somehow transported to BAM? Yet Jonsson’s cut-out view of Samsa’s upstairs room—we peered into it from above—perfectly expressed the story’s skewed perspective. It also added that peculiarly Kafkan sense of something mysterious lurking just beneath the surface of what we take for “real.”

No interpretation of Kafka’s allegory can succeed without a solid Gregor Samsa, and Gardarsson’s was both solid and light, bouncing off the walls of his room, his voice high, tremulous, worried, though the ancillary performances, by Nina Dögg Filippusdottir, as Gregor’s sister Greta, Ingver E. Sigurdsson as Gregor’s father, Hermann, and Kelly Hunter as his wife, Lucy, were too stylized to make an unequivocal impact.

Nick Cave and Warren Ellis’ score varied wildly in style and appropriateness—moving and minimalist bare in spots, and insipid in others—especially when a lyric broke whatever spell the show had conjured, just before the Harvey’s curtainless curtain call. But Nick Manning’s sound design seemed well-mixed for this house.