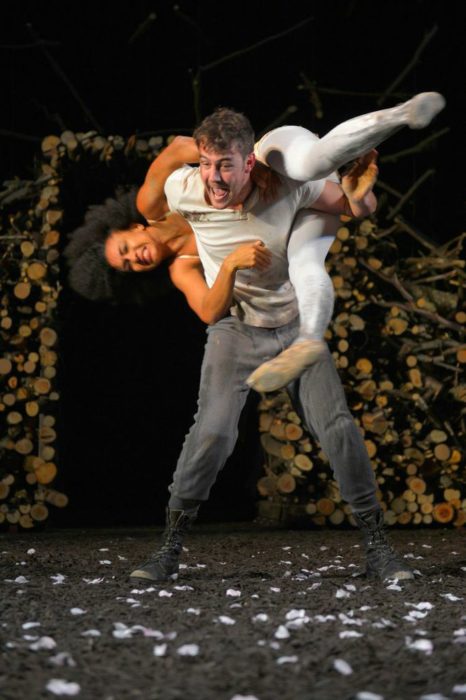 “To sleep, perchance to dream…” The Bard of Avon sure loved the scenarios and fantasies that visit mankind once the head hits the pillow and we drift off into sleep. From Lady Macbeth’s nightmares to the monstrous Caliban’s dream of beauty, they permeate his plays, but perhaps none so fully as “A Midsummer Night’s Dream,” in which most of the major characters fall asleep in a spirit-populated forest and awaken to selves that are not quite themselves.

This perennially popular comedy, in an energetic, highly physical production helmed by director Shana Cooper at California Shakespeare Theater, is a perfect ending to summer and a sheer delight from start to finish. Some cuts surely were made to bring it in at two hours and 20 minutes (including intermission), but they are so seamless as to be invisible as the fairies who drive the action by making mischief in the human world as well as their own. Shakespeare’s fairies are not the Disney kind, but capricious, often-malevolent, spiteful sprites who delight in meddling in and, occasionally mending, the affairs of others.

The others, in this case, are a quartet of young lovers: Helena (Lauren English), who dotes on Demetrius (Nicholas Pelczar), who has spurned her for the pert Hermia (Tristan Cunningham) who, in spite of her father’s wishes, persists in being in love with Lysander (Dan Clegg). Got that? OK, good, because there’s more. The fairy queen, Titania (Erika Chong Shuch, who also choreographed the movement in this staging — and there’s a lot of it) and king, Oberon (Daisuke Tsuji), have fallen out, and Oberon, with the aid of his tireless henchman Puck (Danny Scheie), decides to punish his stubborn consort by making her fall in love with a donkey. All this is done with the aid of a magic sleeping potion that literally makes one fall in love at first sight.

Except Puck screws it up and, before you can say “what fools these mortals be,” all the guys are in love with Helena and nobody wants Hermia and thereby hangs the tale.

Nina Ball’s set makes a nice transition from palace (oh yes, the Duke Theseus is preparing to wed the conquered Amazon Hippolyta [Tsuji and Shuch again]) to forest, where an archway of logs frames the actual hill and wood behind the stage of Cal Shakes’ open-air theater. Shuch’s clever choreography ushers it in. There is a troupe of “rustics” (tradesmen with little or no education) that will rehearse in the wood, hoping their slapdash play will be chosen to celebrate the Duke’s nuptials, and that adds still another dimension to a play already heavily populated by royals, mortals and supernatural beings. From among them will come Bottom, an officious know-it-all, destined to become what he is naturally, the ass adored by the fairy queen.

A couple of performances are over-the-top and Margo Hall’s Bottom is one of them. Another is Scheie’s Puck, to which the actor brings his usual shtick. Everybody else is right on. The four lovers are lovely, with Clegg’s Lysander a standout for both diction and emotion. The fight between Helena and Hermia, each of whom feels betrayed by the other and their swains, is epic and, for my money, the best thing in the play. Tsuji is a thoughtful Oberon and a clueless Duke, who doesn’t get that his wife-to-be feels like a slave — which she is. Shuch makes a beautiful Hippolyta and Titania but, unfortunately, is a better dancer/choreographer than actress.

Among the rustics are several Bay Area stalwarts, like James Carpenter, in tiny roles. One of them, Catherine Castellanos, makes the most of her moment in the spotlight as she enacts a wall with a chink in it. It is a brilliant touch. And Liam Vincent, as the director, Peter Quince, is nothing short of marvelous. The play itself, ridiculous as it is, usually provides a tedious ending to “Dream,” but not here, thanks to the inventive stage business and the comic skill of the actors.

The whole thing is as fluffy and light as the cotton-candy curtain. You may be a little sorry to see it come down.