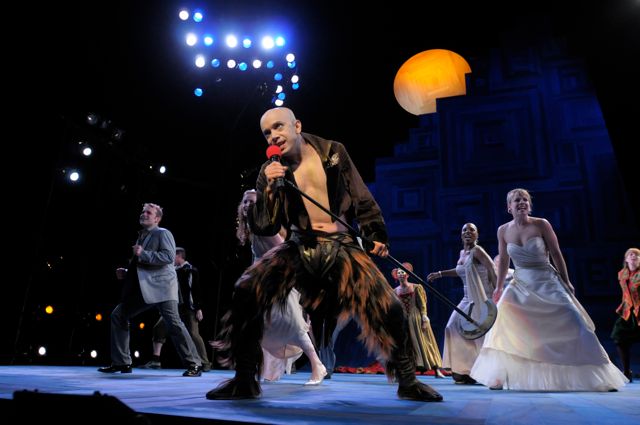 “Oh, what fools these mortals be,” declares Puck. And never as foolish as when they are in love, he might have added. Foolery is the hallmark of California Shakespeare Theater’s new production of “A Midsummer Night’s Dream” and it is the most delightful romp through an enchanted forest one could wish for. I saw this play a year ago at the revered Stratford upon Avon Festival in England and, I am only a little hesitant to declare this one far more enjoyable. Director Aaron Posner (a playwright himself) has cut some of the fat to beef up the comedy and it works wonderfully well, possibly because all the stars are in the funny parts.

Patty Gallagher, who just finished a bravura turn in “Happy Days” at Cal Shakes’ Orinda outdoor playhouse, is on board, as is Dan Hiatt, her co-star in that play. Veteran Bay Area comic/clown Joan Mankin plays Snug the Joiner with a heavy Russian accent and, in the most inspired casting of all, Danny Scheie (“You, Nero”) takes the role of Bottom, the wordy tradesman who finds himself temporarily transformed into a donkey. Scheie plays the scene-stealing Bottom tres gay, with an upper-crust British enunciation that is hilariously out of synch with his actions. He makes a great ass of himself and nearly steals the show as Pyramus when, to borrow a line from “Macbeth,” “Nothing in his life became him like the leaving it.” That is to say, Scheie does a great death scene. They all are members of an amateur acting group, hoping to perform at the wedding of the Duke of Athens and his lady. Ted Barker and Lance Gardner fill out the troupe. Usually, the “tedious play of Pyramus and Thisbe” that they put on is just that, tedious, but, in the hands of these zanies, it is so fantastic, that the entire second act is given over to it.

The four lovers who get lost and mixed up in the woods are well played by Lindsey Gates, Avery Monsen, Erin Weaver and Richard Thieriot. The women are especially strong, perhaps because their parts are written that way and the fight between Gates’ outraged Helena and Weaver’s teenybopper Hermia is terrific. The sometimes-used convention of doubling the Duke and his bride and the king and queen of the fairy realm works very well here, with tall, cool, elegant Pegge Johnson playing Hippolyta/Titania and Keith Randolph Smith as her imperious, slightly oafish Theseus/Oberon. But best of all is Doug Hara’s mischievous, graceful, slightly cynical Puck. Hara is a member of Chicago’s Lookingglass Theater which actually is too bad as it would be great to see more of him out here.

This “Dream” is done in modern dress (costumes by Olivera Gajic) except when the Rude Mechanicals change into Elizabethan garb to do their play. The lines are not declaimed but delivered in a conversational tone. The music – and there is lots of it — is contemporary as well, ranging from rock to Golden Oldies to Sondheim. The set is positively magical. Brian Sidney Bembridge has designed a sky-blue stage floor, with a faint Greek key figure, that swoops up the back wall to become a high tower, topped by a full moon. Doors open in the wall to reveal Titania’s bedchamber or frame Oberon’s rage. In the forest scenes, ladders are inserted into the floor and the actors make ample use of them. The whole thing adds up to one of the best efforts Cal Shakes has put forth to date. It’s the kind of dream from which you don’t want to wake up.