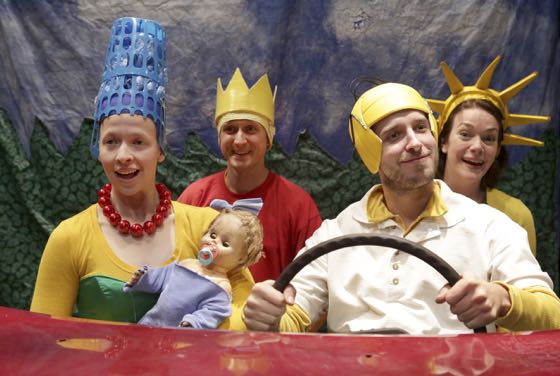 Music by Michael Friedman with lyrics by Anne Washburn

Four survivors sit huddled around a fire, which provides the only light on the scene. They’re dressed in grungy grays and tans. Matt (Daniel Desmarais) is recreating a story from the past: an episode from “The Simpsons”. Jenny (Leah Urzendowski) occasionally interrupts or adds a line. It’s an eerie view of the near future or of our preliterate past—and of the power of storytelling.

In Theater Wit’s “Mr. Burns: A Post-Electric Play”, playwright Anne Washburn foresees a time when power plants are down and the electric grid is dying. Director Jeremy Wechsler stages this dystopian comedy/drama with style and flair—and suggests that survival might depend on our carrying on the mythology of the 26-year epic television series, “The Simpsons”.

Act one, the campfire scene, takes place “in the very near future.” The travelers have arrived separately and they query each other about the status of different locations. “Where did you come from?” “What’s Framingham (or Stamford) like now?” “How’s Boston?” “Boston is a mess.” One says there was “a barricade around Bridgewater so I cut over to 95 and took that down to Providence. Providence was deserted, not even a lot of bodies….” Nuclear power plants go up and people flee the areas. Millstone, in Waterford. Oyster Point, near Asbury Park.

They quiz a new arrival about missing people. Each has a notebook with a list of names, which they read off in turn. No. No. That wasn’t her. Not him either. It’s reminiscent of a post-9/11 scene.

“The Simpsons” story Matt is reconstructing is the “Cape Feare” episode from season 5, which was itself a satire on two versions of the film Cape Fear from 1962 and 1991. The references to this story line continue throughout the play. Sideshow Bob (Jeff Trainor) appears, hellbent on murdering Bart, then hides himself under the car as the Simpsons drive to witness protection on a houseboat in—yes—Terror Lake. Mr. Burns (Andrew Jessop), owner of the nuclear plant where Homer works, appears with murderous intent.

Act two, seven years later, finds the crew in a makeshift TV production studio, with lighting from a skylight. They’re making commercials about lives that no longer exist (iced drinks, hot bubble baths and lunch at Pret a Manger) and products that are being hoarded, like the Diet Coke collector in Denver. The commercials will accompany shows replicating various Simpsons episodes, to be shown on local stages as in the early days of theater. They’re buying “lines” from people who have saved them from memory and competing with other companies—like one that has produced 23, no 27, episodes.

Seven years after the end of the world as we know it, intellectual property law has turned into caveman-style possession and murder (spoiler here). And they’re still mourning for their lost world. “We’re breathing, we’re drinking, we’re eating, it’s all broken open, you know it has,” says Gibson (Trainor).

Act three is 75 years later. Actors resembling Simpsons characters perform “The Shades of Springfield” about the days when the light died. Lists of names are intoned. And there’s music from Gilbert and Sullivan. (Trainor does a fine “Three Little Maids From School Are We.”) When the full stage is revealed, the Simpsons are ready to board their houseboat, despite obstruction from evildoers such as cartoon characters Itchy and Scratchy and Mr. Burns, armed with a cutlass. Everyone but Bart is dispatched to heaven and Marge, Homer and Lisa appear as angels, wearing shiny wings of foil and plastic wrap. Mr. Burns is fed to the piranhas. In the finale, lights come up on all the motley light fixtures in the theater. A curtain parts and we see Mr. Burns powering the generator with a bicycle—until he falters and the lights—go—out—again.

Trying to describe the narrative of “Mr. Burns: A Post-Electric Play” is foolhardy. The story line is complex, but the production is immensely creative and well-acted by the cast of eight (Kelly Abell, Desmarais, Hannah Gomez, Christina Hall, Jessop, Leslie Ann Sbeppard, Trainor and Urzendowski). Costuming by Mara Blumenfeld and Mieke van der Ploeg goes from grunge to salvage to plastic bag and wrap and always enhances the characters’ performances. Joe Schermoly’s scene design and Mike Durst’s lighting are visually brilliant.

Washburn’s play was commissioned by The Civilians, a New York-based theater company, and first produced in 2012 at Woolly Mammoth Theatre Company in Washington. It received an off-Broadway production in 2013 at Playwrights Horizons.

Here’s a caveat for prospective ticket-buyers: This is a richly detailed, troubling and hilarious play. Many audience members appreciated the Simpsons’ references and other pop culture in-jokes. But if you’ve never seen the Simpsons or have little memory of the show, you’ll probably feel as if you landed on a distant planet.