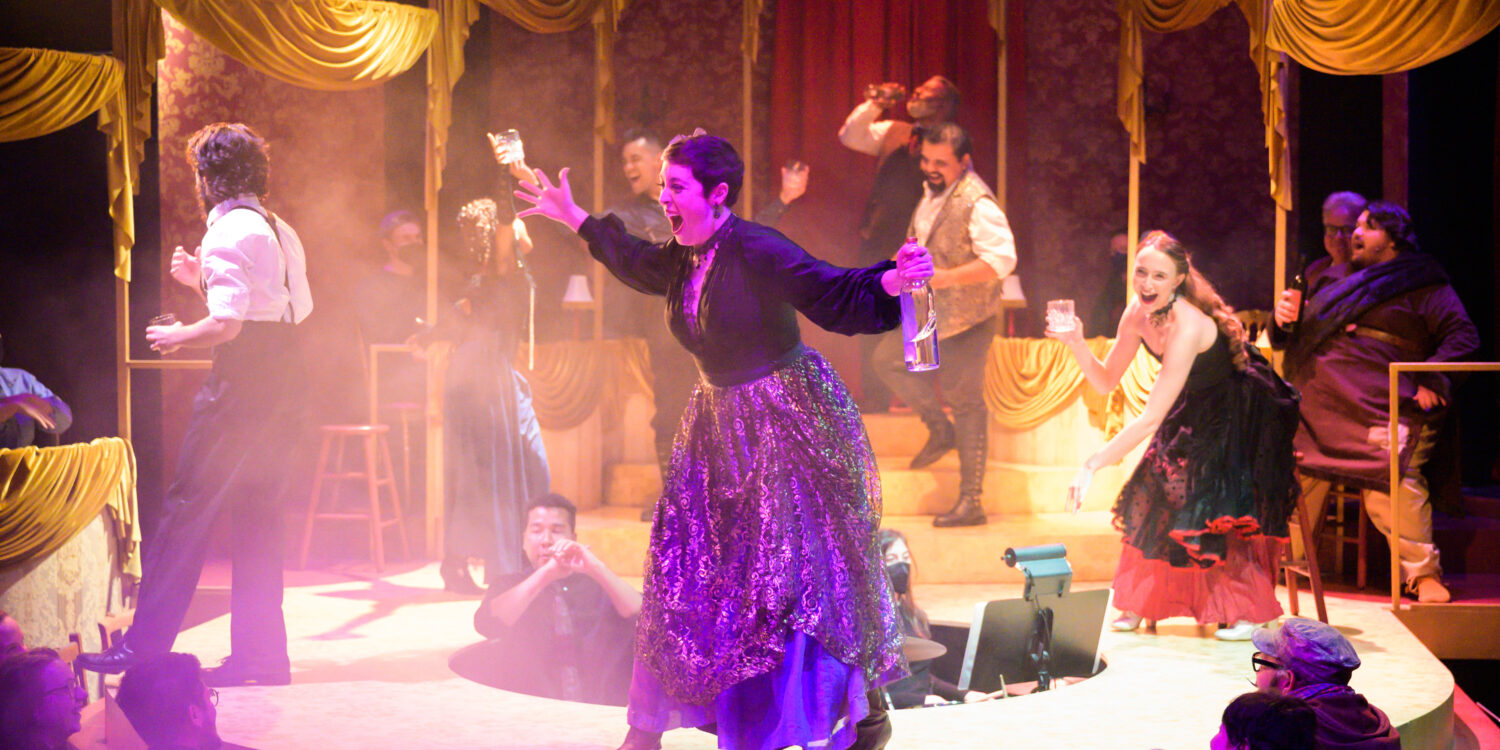 What a sparkling night of musical theater and an enormous triumph for Shotgun Players! It was thrilling to see our own spunky theater company produce the West Coast premiere of such a complex, multifaceted, and challenging production as the sung-through, immersive musical “Natasha, Pierre & the Great Comet of 1812” (“The Great Comet”) by Dave Malloy.

Yes, the same show that was nominated for 12 Tony Awards when it played on Broadway in 2016-17 is rocking the house to sold-out audiences in Berkeley. And no wonder. With a super-talented cast and crew, “The Great Comet” is ingenious, exuberant, and melodic. Shotgun’s Ashby Stage has been transformed into a 19th-century Russian nightclub, with café tables and balconies built into the stage available for seating (Set Designer Nina Ball). And vodka is being served!

Based upon a shocking segment of Leo Tolstoy’s “War and Peace,” the electropop opera follows the trials and tribulations of innocent and impulsive Natasha (fab Jacqueline Dennis). She arrives in Moscow to await the return of her fiancé from the front lines. But she falls under the spell of the sinewy and sexy seducer you love to hate, Anatole (terrific Nick Rodrigues). Only middle-aged, depressed, and disillusioned Pierre (soulful Albert Hodge), can help her recover her self-worth and reputation.

The large cast of “The Great Comet” is replete with creative singers who wander through the audience and onto the big catwalk between the regular seating and the stage. And their articulation was nearly perfect. The opening number and the cast’s description in Shotgun’s program leave no doubt about their roles and relationships.

Kudos to co-directors Patrick Dooley and Erin Mei-Ling Stuart. As Stuart told Berkeleyside, “I’m carrying more weight in terms of staging, movement, choreography, and working with Music Director Daniel Alley, while Patrick is working more on how the characters interact, their feelings, and the acting details.”

Creator and composer Dave Malloy, a former Bay Area resident, started working with Shotgun Players in 2005. In 2008, he co-created and composed “Beowulf: A Thousand Years of Baggage” (in collaboration with Banana Bag & Bodice) for the Ashby Stage. Following “Beowulf’s” celebrated run in New York, Malloy co-created and composed the Shotgun Players production of “Beardo” in 2011. Malloy’s musical “Octet” https://culturevulture.net/theater/octet/was produced at Berkeley Rep in the spring of 2022.

Although Malloy “…doesn’t have a big ego, he’s particular about his work,” said Erin Mei-Ling Stuart. “He has a specific vision. Notes in the script describe the vocal style he’s looking for in certain performers. One character he describes as having a Rogers and Hammerstein type of vocal quality, and another he specifies as using operatic techniques.” The musical influences are varied. “There is a lovely folk number, an avant-garde opera piece, and of course, electropop. The score is rich and robust,” said Stuart.

“I am excited to help bring the show to the Ashby stage, to an intimate environment,” Stuart explained. “On Broadway, the audience was a bit far away from the stage, which could lead to the audience’s detachment. But the story is exciting. Having the actors close and all around you adds to the liveliness of the piece. It’s the way the musical should be seen.”

“The Great Comet” runs 2 hours and 45 minutes with one intermission at the Ashby Stage, 1901 Ashby Ave., Berkeley, through January 15, 2023 (and perhaps longer). Mask-wearing is encouraged but not required, except on “Masked Matinees,” November 27, December 18, and January 8. General admission ticket prices are $30 – $62. Tickets for those 25 years and under: $7 with discount code MADTIX. Community Tickets for those with financial hardship: $15 with discount code COMMUNITY. Shotgun offers live-stream performances on November 17 and December 1, 2022, for $20. There is a special haptic tour and performance for blind and low-vision patrons on Sunday, December 4, 2022. Reservations are encouraged.
This article originally appeared on Berkeleyside.