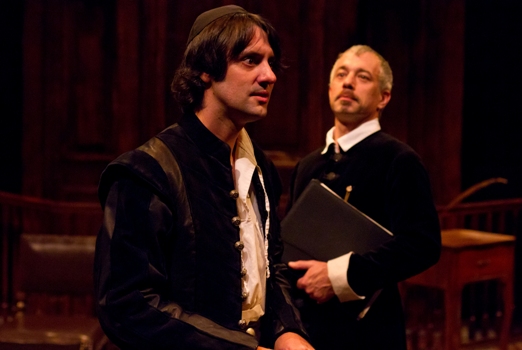 “New Jerusalem, The Interrogation of Baruch de Spinoza at Talmud Torah Congregation: Amsterdam, July 27, 1656” is the daunting title of David Ives‘ very ambitious play about the fate of the budding young philosopher Baruch de Spinoza (Sam Henderson), who at 23 finds himself on trial for his unorthodox beliefs about God. Tolerance of Dutch Jews, especially one seeking refuge from Portugal, can only go so far, according to Abraham van Valkenburgh (Seth Reichgott) Amsterdam’s Christian leader.

Ives’ structure is reminiscent of Robert Bolt’s “A Man for All Seasons” and, as with that play, he admirably avoids literary pretensions, though the inquest is fictional, it resonates historically and as a mirror of our times. Spinoza is basically a free thinker, hanging out with Simon de Vries (Jake Blouch) at pubs, and they while away the days painting. Spinoza is formulating his metaphysical concepts, and divides his time as he contemplates the profundities of God, not mention his love for Clara (Mary Tuomanen), a devout Christian.

Van Valkenburgh summons the idealistic, but no less logically aggressive, Spinoza to answer for the radical statements he has been making about God and man. Spinoza is also facing his teacher rabbi Salu Levi Mortera (David Bardeen), from the country that Spinoza’s family fled for its religious intolerance. Mortera is political cover for Vanderburgh, but comes to have morbid doubts about Spinoza’s theories as well.

Ives writes challenging character scenes and walks a fine line, successfully putting forth period religious debates and political history cleanly, but the headiness runs out of steam in some overlong scenes. Eclipsing the academic brittleness is director Charles McMahon, who makes this an actor’s showcase, with careful pacing drawing forth Ives’ eloquence.

Reichgott commands as Valkenburgh, with beautiful articulation and volcanic deportment. Bardeen’s rabbi borders on comical in Act I, but is all part of a crafted performance. Somehow he even pulls off a hokey scene that plays like an outtake from a famous horror film.

Henderson gives Spinoza youth, vision and gravitas, in a gutsy, unpredictable performance. Toumanen’s Clara is also very inventive in an obtuse part that is little more than a plot device that she makes work. David Blatt is quietly effective in an underwritten role. Blouch, as the charmingly wayward friend, overcomes the sketchiness, too.

Nick Embree’s simple and rich set design opens the often crowded St. Stephen’s Theater space in one of the best that the Lantern has ever had in its productions. Maggie Baker’s costume designs are really exquisite—gorgeous velvets and leather on the men and Tudor bodices and pink-dusted florals on the women.

This is a fine season opener by the Lantern of a play bursting with ideas and fine performances among the leads.