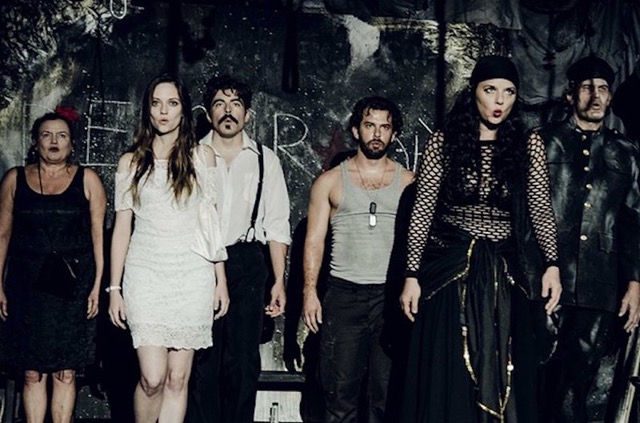 In the course of a fast-moving 90 minutes, seven nameless characters watch the express train pass, headed for Paris (the Orient Express, of course). They rehearse for a gypsy wedding, conduct a hooker and pimp scene, stage a fake beating and a busking, and perform monologues, dialogues and songs about identity, geography and American pop culture.

The Blindman (Michael Garvey) yearns to touch the train and experience a day (just one day) in Paris. He fought against the fascists in World War II, he says, then was betrayed by the Communists and imprisoned in Siberia. Eventually, his niece, the Bride (Emily Nichelson) helps him believe that he experiences that dream.

The Bride’s Mother (Beata Pilch) mourns the state of alcohol and men in the Balkans. Speaking as a drunken Balkan man at one point, she says, “They’ve faked our history, they’ve faked our future …. We’re the scum of Europe, we’re a nation of gypsies, we don’t even know where we really come from, we’ve never been free. We’ve never had a proper country, we’ve never been independent, we’ll never free ourselves of communism….”

Dennis Bisto plays the Director (and other roles), who guides the cast in its rehearsals and performances. He laments about a bloody feast (“it smelled like blood and minced meat, like vinegar and charred skin, like licked plates and sweat”), where no one washes the dishes, and Marx, Engels, Lenin and Stalin leave or fall asleep.

Late in the play, the Strange Woman (Nicole Wiesner) comments on the angst of separation, dramatized as the train is about to leave. “The time passes more slowly than normal and more than the moment of departure is coming, more words become ridiculous, conventional, repetitive, terribly hollow… Carcasses of words, in effect, exchanged between several thousand beings who have already said it all, but who are suddenly afraid of the void and try hard to make small talk right up to the last minute.”

The whole cast, in the “words cabaret,” explains the shifting, disappearing borders of the Balkans: the motif of “Occidental Express.”

Szabó directs this thinly woven drama skilfully. He has an outstanding cast, who make the tiny Trap Door stage come alive with poetry and madness. I neglected to mention two other cast members who make up this cast of seven. Mike Steele is the Groom and an American traveller, who carries his trumpet (a pocket trumpet?) in his briefcase. Essential (and rarely seen) is the Stationmaster and DJ, Gary Damico, whose music is lively, mournful and spookily cheerful.

The set design is created by Stefan Roseen with lighting by Richard Norwood and costumes by Rachel M. Sypniewski. Original music is by Ovidiu Iloc with additional music and sound design by Danny Rockett and Gary Damico.

This review was previously published in Third Coast Review.