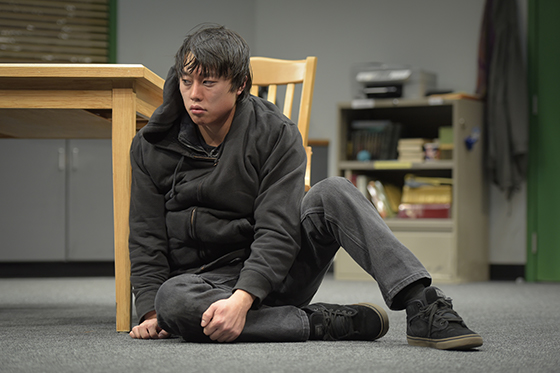 I didn’t sleep well the night I saw “Office Hour,” and to my mind that’s a good thing, because my restlessness meant that I was deeply affected by playwright Julia Cho’s tension-ridden, creative exploration of the complex natures of mass shooters — their outer personae and inner angst, and society’s mistrust of those who are different.

Whereas Cho’s poetic drama, “Aubergine”, which premiered at Berkeley Rep in 2016, interlaced the themes of parental loss, memory, love and food, “Office Hour” ratchets up an anxiety-filled 80 minutes (with no intermission to break the mood) exploring the angry, sullen and scary Dennis, and people like him who massacre the innocent. With taut direction by Lisa Peterson and a first-rate cast, “Office Hour” will linger in your consciousness for a long time.

Before he appears on stage, we hear a lot about the bottled-up, brooding college English major, Asian-American Dennis (Daniel Chung), as two adjunct English instructors, the nervous African-American Genevieve (Kerry Warren) and the racist bully Caucasian David (Jeremy Kahn), warn their Asian-American fellow teacher Gina (Jackie Chung), about how disturbed and disruptive Dennis is in class. His writing is so filled with sexually graphic horrific imagery that other students are dropping out of the classes he is taking simply to avoid him. “All I know is there’s something wrong with him. Something very wrong … Like, there are broken people—always have been, always will. But now? It’s like they’ve been given ideas.” says Genevieve. David and Genevieve failed to make any headway with Dennis. And now that Dennis is taking Gina’s writing class, they condescendingly cajole Gina to “do something” about Dennis. They “must have stuff in common — not psychologically but, you know, a background.”

Out of compassion, Gina valiantly tries to connect with Dennis by insisting that he attend her office hours as a component of his grade. His first appearance on stage in sun glasses and black hoodie is menacing. He sits, soundless, facing away from Gina, clutching his backpack. After Dennis’s surly silence, Gina fills in the gaps by revealing some personal sorrows — a failed marriage, a career going nowhere and an unhappy Asian-American childhood that still shakes her. Jackie Chung portrays Gina with great nuance, authenticity and heart.

The stage explodes when Dennis finally reveals himself in all his desperate anguish, shame and loneliness, in a masterful performance by Daniel Chung. Using flash-like lighting, Cho creatively presents a violent succession of possible outcomes among the characters, including multiple shootings.

As their interaction explodes, we learn some of what makes Dennis tick, but not enough. While it’s true that Cho could not fully explore the complex mental health and motivations of a mass shooter in 80 minutes, further insight into Dennis’s home life and psyche would have been welcome. But perhaps the point is that such a mind is impossible to grasp. The playwright’s emphasis rests on the importance of emotional connections and the problems caused by ethnic prejudices. She succeeds strongly in exploring these issues. In the end, nothing is resolved, and another real-life shooting hits the media.

This review originally appear on Berkeleyside.com