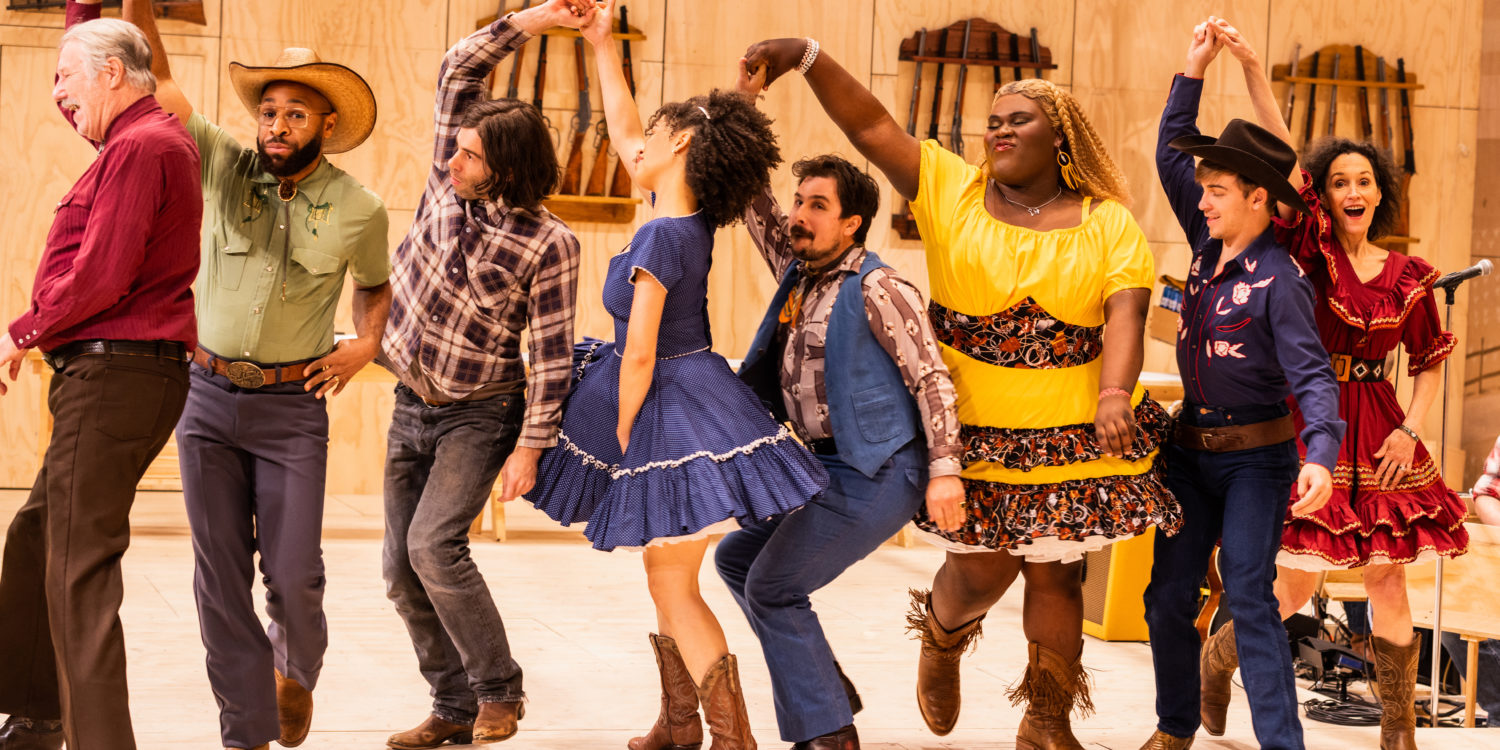 The new production of “Oklahoma,” the 2019 Tony Award Winner for Best Revival of a Musical, is director Daniel Fish’s re-imagined version of the light and charming 1943 musical filled with familiar lyrics and harmonious melodies by Rodgers and Hammerstein. The new “Oklahoma” adds a new psychological and more violent slant to the production. It occasionally drifts towards trendiness rather than alterations that make theatrical sense. True, no word of dialogue or music has been changed, but the story’s thrust is new. And that’s not an entirely bad thing.

Set in 1906, “Oklahoma” is the story of Laurey Williams (excellent Sasha Hutchings), who lives with her Aunt Eller (understated Barbara Walsh) on a farm in the Oklahoma Territory. Laurey is being courted by two rival suitors, handsome, brash cowboy Curly McLain (expressive Sean Grandillo) and the sullen, menacing, but perhaps misunderstood farmhand Jud Fry (outstanding work by Christopher Bannow).

The focus of the play is the Box Social, at which men bid on the picnic baskets home-made by the townsfolk’s women. Who will take Laurey to the event, Curly or Judd? Laurey had already accepted farmhand Jud’s invitation, largely to make Curly jealous. In the famed dream sequence, initially choreographed by Agnes De Mille, Laurey dreams of her wedding, but to whom will she wed? In the end of the play, the love triangle explodes and ends sadly for one of the men.

In retrospect, the plot of this Pulitzer Prize-winning 1943 musical is a bit weak, although it was revolutionary in its time because the songs were fully integrated into the action. “Oklahoma” was then an upbeat American story, with its more violent aspects underplayed. And, of course, there is no mention of the native Americans whose land had been usurped. But audiences reveled in the music and lyrics in tunes like “Oh, What a Beautiful Morning,” “The Surrey With the Fringe on Top,” “I Cain’t Say No,” and “People Will Say We’re in Love.”

And the music still holds up well. The orchestrations and arrangements are re-imagined with a contemporary country sound, using only a small band and Sean Grandillo on guitar. The many lighting tricks include blackouts and super-close-ups that primarily work fine. But the dream sequence, newly choreographed by John Heginbotham and danced by Gabrielle Hamilton, left me cold. It tried for more of the essence of a nightmarish dream but looked more like a gymnastics event than a ballet.

Daniel Fish’s directorial emphasis on the violent aspects of the storyline extends to the final scene between Judd and Curly. His is the third iteration of the ending. The 1943 and the 1955 movie versions, each with their own variations, made it clear that Judd was a villain who died by his own hand. But no spoilers here. You’ll have to see this “Oklahoma” to experience its stark and enigmatic conclusion.

“Oklahoma’s” running time is 2 hours and 45 minutes, including one intermission. It is recommended for children ages 12 and older. Masks for unvaccinated attendees are required, and masks for others are highly recommended.