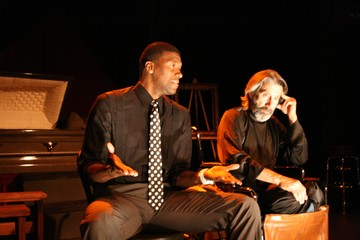 At the center of “Our Lady of 121st Street” is a character whom we never see, never hear from, but who still exerts a strong gravitational pull on a bunch of tough, smart New York kids, male and female, now grown into young adulthood: Sister Rose, a nun.

An alcoholic disciplinarian, Sister Rose is – or rather, was – also the sort of progressive, socially conscious nun now causing heartburn for so many conservative American Roman Catholic bishops.

Sister Rose made such an impact on the lives of her former fourth-grade students, that, even now dead, their affection for her has brought them back to a funeral home on Manhattan’s Upper Upper East Side (“Spanish” Harlem in my day because of the large number of Puerto Ricans then living there) to commemorate her.

It has also brought them back to conflicts with each other and within themselves that had seemingly been put to rest long, long ago. But since someone has made off with the nun’s body from her open casket, there’s more time – and energy and reason – for confrontation than commemoration. Anger and pain are the coin of the realm on East 121st Street.

Inez (Katy Jacoby), for example, is happy to see Norca (Claudine Claudio) again until, after a few drinks together in a neighborhood bar, she’s reminded that Norca had been bedding down with her husband, a major factor in their divorce. She is now not so happy to see Norca.

“Rooftop,” a.k.a. Walter (Moe Irvin), that ex-husband, tries to relight Inez’s feelings only to be torched by her fury and resentment. And so it goes with all the others – Edwin (Christian Monzon) resents being tied down by caring for his retarded younger brother, Pinky (Ray Cosico); Flip (Jonté Legras), a gay man now living in Minnesota is embarrassed by the outré behavior of his young gay lover (Timothy Alonzo); Father Lux (Daniel Hutchinson), the parish priest is increasingly doubtful of the reality and value of religion; Vic (Ed Dyer) is easily overwrought by the insensitivities of others; Marcia (Heidi Rhodes) is tortured by her own failure to find love; Sonia (Ferin Petrelli), who seems to serve more as Norca’s punching bag than a match-head of her own anger and – especially – Balthazar (Ronnie Marmo), the NYPD Detective assigned to the case of Sister Rose’s disappearance. He reveals, slowly, through the course of the play, a long-standing, self-inflicted emotional wound that will never heal.

Director Joe Palese skillfully moves his players, given their volatility, around the stage like a bomb squad commander dealing with a suspicious parked car on a midtown New York street. The set, by Hutchinson and Joe Dallo, is sparse, yet evocative – a small barroom, typical of that Manhattan neighborhood, is tucked into the stage-left corner; the funeral parlor and empty casket are up-stage and center.

Given my own background (a Brooklyn parochial school) I found myself glancing again and again at that open casket and wondering if I would have had the courage to peer into the open coffin of my third-grade nun – Sister Heinrich Himmler, I think her name was.

My answer: Hell no, especially if I was told she, like Sister Rose, wasn’t in it. That would have me nervous that she was still alive and on the prowl, looking for little boys to whack on the knuckles with her long, thick ruler.