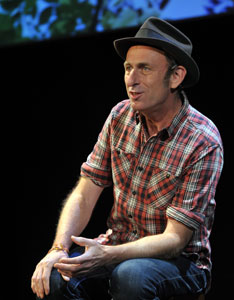 More than a monologue, not quite a play, you might say that David Cale’s “Palomino” is a horse of a different color. The highly entertaining theater piece now onstage at Berkeley’s Aurora Theatre is a showcase for the storytelling talents of Cale, who not only performs but directed and wrote the script. Playing numerous roles: men and women, young and not-so-young, gay and straight, Cale engages the audience for the 90-minute running time with the story of a charming Irish Central Park carriage driver who becomes an accidental gigolo. But the most interesting thing about the tale of Kieren McGrath, an aspiring novelist who is only taking on the equine gig as a favor to a friend, is the people he meets and how their fortunes intersect, bringing the piece full circle at the end.

It all starts when Kieren, scorning the top hat favored by most other carriage drivers in favor of a Frank Sinatra fedora that simply screams “Come fly with me,” picks up Marsha, a Manhattan socialite of a certain age, for a turn around the park. The young Irishman’s good looks and insouciant manner speak to Marsha— proprietor of a high class escort service— and she makes him an offer. If he will squire certain single women of her acquaintance to social events and “make them happy” at the end of the night, he can clear some $300,000 a year. “You’ve got another good seven years in you,” she adds. Sensing that this may give him a subject for the book he longs to write, Kieren, after some reluctance, accepts.

We begin to meet the women and Kieren begins to disappear into his own story. Widowed or divorced, with plenty of money, aging but with their sexual appetite still intact, they appreciate having Kieren around. He, in turn, gives them a new lease on life. One stands out. Vallie, having watched her beloved husband die of cancer, tired of an idleness punctuated by yoga lessons and charity work, agrees to meet Marsha for lunch at Tavern on the Green where they can see the carriages waiting outside. Once she gets a look at the driver of the palomino, she’s a goner. But the difference between Vallie and the other women is that she falls in love. And Kieren, against his will, begins to reciprocate her affections. They travel to California: L.A., Big Sur and Monterey. She takes him to Malta. And, as the walls start to close in, Kieren, scared to death, runs for his life.

Time passes and the scene moves to London, where the raveled threads of the story begin to come together. It all takes place on Kate Boyd’s spare set with an overhead screen that provides everything from the leaves on the park trees to the waves of the California coast to the paintings on a rich widow’s wall, with help from Heather Basarab’s lights and sound effects by Andre Pluess that go from traffic to the clip-clop and neighing of horses. With Cale as your driver, it’s a fun excursion, although there’s a hint of sadness in the air.