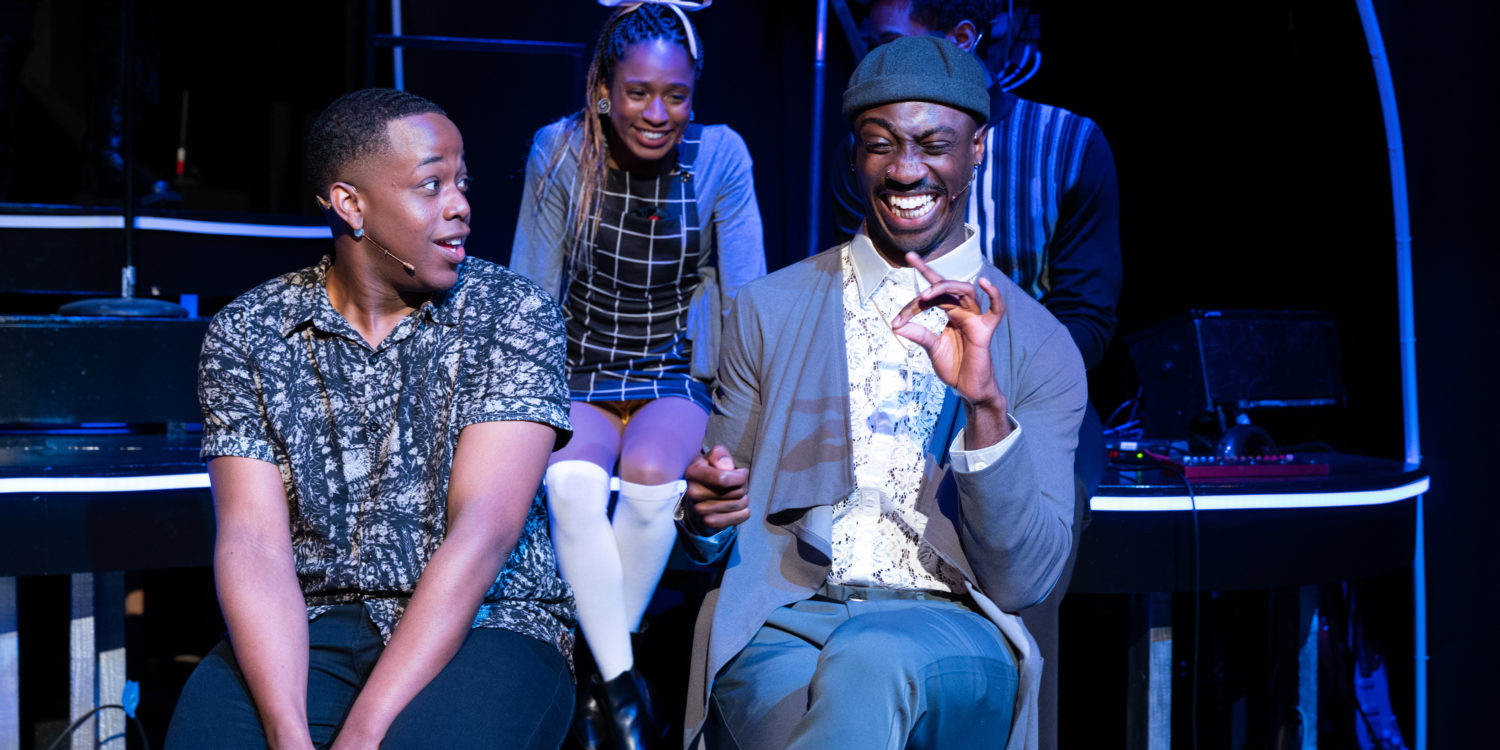 The rock musical, “Passing Strange,” is a quirky amalgam of the autobiography of a young Black American, a raucous comedy, and an international satire, all finished with a soupçon of coming-of-age wistfulness. With a hard-working, creative cast and marvelous musicians, this upbeat night at the theater is just what we all need now.

The one-named rock musician Stew wrote the Tony award-winning “Passing Strange’s” book and lyrics and composed (with Heidi Rodewald) its music. Created in collaboration with Annie Dorsen, the show follows the picaresque journey of Stew’s double, referred to as “the Youth” (fantastic Devin Cunningham). He is searching for what he calls “the real”— love, art, music, authenticity. Interspersed with the Youth’s on-stage actions, we are simultaneously treated to the observations and comments of an older Stew, in the form of “the Narrator” (remarkable Albert Hodge).

The action begins in 1970s South Central Los Angeles when the then middle-class Black teenage Youth finally agrees to attend services with his long-suffering Baptist Church-going mother. Rolanda Bell is terrific as the fanning and gossiping overdressed church-lady with a deep love for her son.

The Youth gets turned on to the gospel church choir and the weed supplied by the cynical choir director (amazing Shakur Tolliver). The other multi-talented choir members, Angel Adekoun, Myles Brown, Champagne Hughes, and Chanel Tilghman, who play multiple roles throughout the show, add verve, vivacity, and excitement to the experience.

After a stint with a (superbly awful) punk band, the Youth travels to Europe, first to pot-hazed acceptance by a group in Amsterdam, where he finds unconditional love. But not content with or feeling worthy of that love, he moves on to an angry anarchist faction in pre-unified West Berlin. The Youth tries to refashion himself as the quintessential oppressed American Black dude to gain the group’s acceptance. His attempt is one of the show’s funniest scenes, with its lighthearted satires of two countries at once.

Eventually, we all grow up. And at the close of the two-and-a-half-hour production (including one intermission), we find an older, wiser, more grounded, and yes, more real Youth.

If “Passing Strange” seems familiar, it may be because its inaugural performance was at Berkeley Rep in 2006, before its successful off-Broadway (2007) and Broadway runs (2008). And for the curious, the title “Passing Strange” comes from Shakespeare’s “Othello,” act 1, scene 3, lines 158–163, when “passing” meant “surpassingly.” Othello speaks of Desdemona’s response to hearing Othello’s life story: “She swore, in faith ’twas strange, ’twas passing strange;” Of course, now there are various definitions of “passing,” all of which have relevance to the plot.

Kudos to director William Thomas Hodgson for keeping all the balls in the air, Daniel Alley for the animated music direction, Romello Huins and Stephanie Johnson for the fabulous lighted set, and Jasmine Milan Williams for the extravagant costume designs.

The informality and sketch-like humor of “Passing Strange” belies the thought and talent behind it. It’s a rare theatrical experience; so go and enjoy it.

In addition to live, in-person performances, Shotgun offers two live-stream performances on March 17 and March 24, 2022, at 7 pm for $20. More information can be found at www.shotgunplayers.org A video-on-demand version will be available starting April 14 info@broadwayondemand.com
This article originally appeared on Berkeleyside.