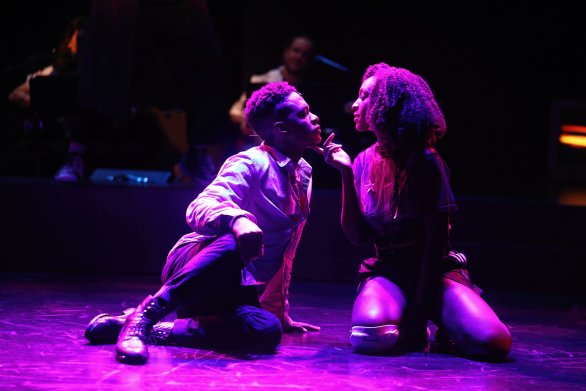 Book & lyrics by Stew
Music by Stew and Heidi Rodewald
Created in collaboration with Annie Dorsen
Directed by Tea Alagic
The Wilma Theater
www.wilmatheater.org
Through Feb. 18, 2018

The rock musical Passing Strange was co-composed by Stew and Heidi Rodewald a decade ago and in its short run on Broadway was a sensation, garnering six Tony noms and two wins for Stew. It wasn’t your typical jukebox musical or a stylized rock concert. Spike Lee filmed it for PBS, which seemed to prove that this musical was meant to be seen in a live theater. Stew, Heidi and their band toured a concert version over the years, including one at the Wilma Theater in Philadelphia a couple of years ago.

The Wilma has followed up a stunning success of Garcia Lorca’s Blood Wedding this season with a new full revival of Passing Strange with an electrifying cast of singer-actors and musicians. Director Tea Alagic streamlining the uniquely structured show into raucous theater without diluting its musical power. And Stew himself has been involved, working with the show’s musical director Amanda Morton and a blazing onstage band. No wonder there are hints that this new production might be headed for a Bway.

This musical memoir follows the journey of The Youth, from his middle-class dull life outside of L.A. to pursue unbridled artistic adventurism in Europe. It is told in part by the Narrator, who looks back on his life as a self-Greek chorus on his quest for ‘The Real’ in music and life. Stew performed the role originally and in this production Kris Coleman projects a similar rock swagger and commanding vocals, but makes the part completely his own. Jamar Williams portrays the Youth and he too, just owns it musically and as an actor.

Anthony Martinez-Briggs brings the house down as the fiery gospel preacher singing “Church Blues Revelation” and later as the festishta punk rocker Mr. Venus, lurking around on all fours for the apocalyptic showstopper “What’s Inside is Just a Lie.”

In the entr-acte song ‘Amsterdam” a manifesto of diversity as well as intellectual, artistic and social freedom. the Youth meets the sensual Marianne, intoxicatingly conjured by Savannah L. Jackson, who guides his wanderlust with the song “Keys” (It’s Alright) and gives him a place to stay and nudges him to continue exploring.

He lands in Berlin and is adopted by the arts tribe dubbed ‘Nowhaus’, who take him in, but questions his cred as an artist. His girlfriend outs him as an American ghetto kid poseur and challenges his artistic integrity in a way that breaks through. He is almost outed as poseur until he reveals his painful past, as an oppressed minority in America, escaping police brutality and inner-city violence, but his girlfriend Desi, played by the wonderful Taysha Marie Canales, serenades him “Come Down Now” and otherwise doesn’t let him get away passing himself off as a victim of oppression.

The theme, whatever style the music, is the search for artistic and personal ‘realness’ which of course have to come from self-discovery first.
Meanwhile, back home, his mother misses him and he tells her he isn’t returning. he does under tragic circumstances in a theatrically poignant moment that is so powerful and subtle. Palpable Mother and son love and angst between Williams and his Kimberly Fairbanks, heartbreaking in ‘Mom Song’ and luminous on the whispering version of ‘It’s Alright, in a fab red origami opera gown. Lindsay Smiling is nurturing closeted gay choir director Mr. Franklin and later as the nobly louche Berliner club manager.

Williams’ power and versatility in all styles commands throughout the show, from the rock belter ‘Identity’ to the climatic with his younger self in the searing duets “Work the Wound” and “Passing Phase”

Kudos to sound designer Nick Kourtides who equalizes the broad template of music that engulf the Wilma, but do not with a flat wall of sound and disparate styles within this score. The live feeds of the performers appearing in shadowy flashes on the back wall and are completely integrated into the stage composition. Credit set designers Scott Pask and Thom Weaver’ poetic, dramatic rock glamor lighting designs that keep giving, especially popping some ripe Euro-club couture by costume designer Vasilija Zivanic.

By the time of the ensemble reprise of the show’s cathartic anthem “It’s Alright” the music and this cast brings us to a place of powerful musical and theatrical realness.