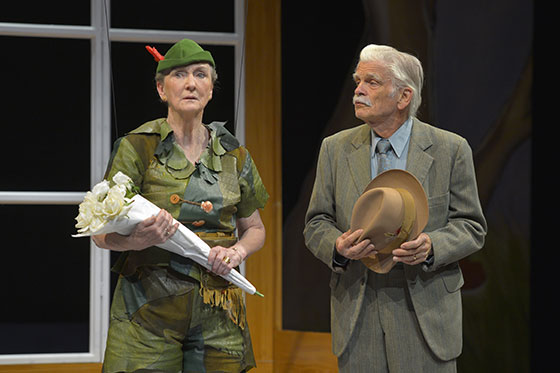 J.M. Barrie’s famed character Peter Pan probably is the ultimate statement on the wish for eternal youth. More than Ponce de Leon’s fruitless search for the fountain, Dorian Gray’s nefarious portrait, or the frozen faces of Botox devotees today, Peter embodies every kid’s wish to never grow up, never turn boring or careworn or drunken or whatever those adults controlling you appear to be, a wish that pursues many of us into adulthood.

Sarah Ruhl’s “For Peter Pan on Her 70th Birthday” digs down a little deeper to uncover the fears that underly that wish — the fear of growing old and ultimately dying. Most of the play takes place in a hospital room, as five siblings keep vigil during their father’s last moments and then at a kitchen table wake, where memories and political views are shared as freely as the bottle of Jameson’s that is passed around (while the silent shade of their deceased parent shuffles, somewhat hilariously, in and out of the scene). It ends with a dream of Neverland, that magical place of pirates and fairies and Lost Boys. This last actually makes sense as Ann, the eldest (played by the always luminous Kathleen Chalfant) once played Peter Pan in their town of Davenport, Iowa, as she tells us in a brief prologue, and her own morbid fear of growing old and dying — even as she ages — informs much of what occurs on the stage.

All this sounds rather depressing but, being a Sarah Ruhl play, is delivered with humor, compassion and cleverness — as well as a brass band and an extremely shaggy dog. Prize-winning playwright Ruhl, a MacArthur “Genius Award” winner and Pulitzer finalist, is the author of “Eurydice” and “In the Next Room (or the Vibrator Play),” both of which were produced at Berkeley Rep, which is presenting “Peter Pan” after its premiere at the 2016 Humana Festival in Louisville, Ky. “Eurydice” was a triumph and “In the Next Room” went on to success on Broadway. If “Peter Pan” does not quite reach the heights of those two remarkable works, it is an enjoyable and engrossing 90 minutes of theater, moving the audience swiftly along its trajectory of grief until it, quite literally, soars through the air.

Responsible for much of that movement is Ruhl’s frequent collaborator, the esteemed director Les Waters, for many years associate artistic director of Berkeley Rep, now artistic director of Actors Theatre of Louisville. Waters works his theatrical magic again here, bringing out not only the best in the play, but in his excellent ensemble of actors. They are (in addition to Chalfant): Ellen McLaughlin as the youngest, named Wendy, of course; David Chandler, who does double duty as the surgeon, Jim, and a very funny Captain Hook at the end; Keith Reddin as another brother-doctor, Michael; and Charles Shaw Robinson as John. Ron Crawford plays the mostly silent dead father. Annie Smart did the scenic design, and costumes are by Kristopher Castle.

So, throw in a stuffed crocodile, an alarm clock, some sword fighting, and a flying bed and there you have it. With a smashing adaptation of “Treasure Island” playing in one theater and “To Peter Pan…” in the house next door, Berkeley Rep is mining the world of children’s literature to come up with a couple of brightly shining nuggets of theatrical gold.