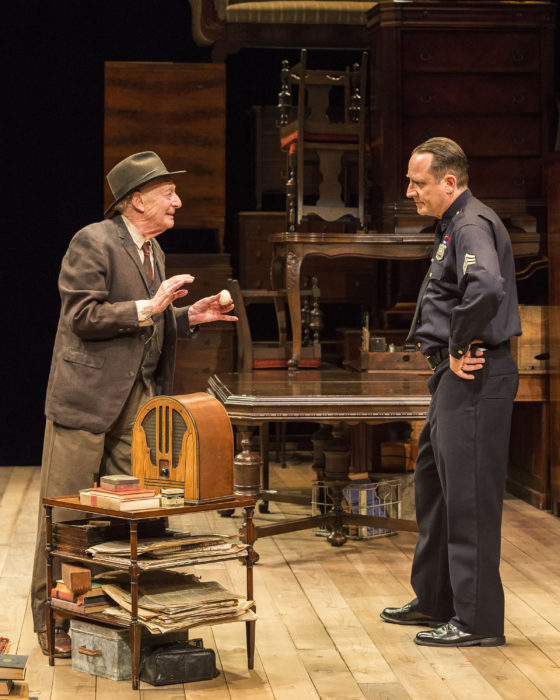 How often have you thought a second act was the meat of a play? Not very, I would guess. Arthur Miller’s 1968 family saga, “The Price,” is one of those rare instances where this is the case.

The wealthy Franz family lost its fortune in the crash of 1929. More accurately, papa Franz, who facilitated the high life, the fancy dresses, the fine furniture, and the tony schools, lost a couple of million dollars, his dignity, and his wife (several months later). Son Walter (John Bedford Lloyd) distanced himself and carried on to become a successful surgeon, while younger brother Victor (Sam Robards), dropped out of college to care for dad, who helplessly spent the remainder of his days in his chair listening to the radio. Victor became a policeman eschewing a promising career in “science” — a strangely vague term from Miller — to dote on the older man.

Victor and his father had subsisted on a single floor of the family’s former brownstone, the fine furniture piled four-high in the back of their quarters. Act I opens with Victor, in his police uniform, waiting for a furniture appraiser. It is 16 years after his father has died, the furniture has remained piled, but next week the building will be torn down. He has to get the stuff out. He trails his fingers along various pieces that evoke memories: his mother’s harp; the wind-up phonograph with the laughing record; his old fencing foil. His wife Esther (Kate Burton) enters on a whiff of alcohol with an air of chronic disappointment. She has memories, too. She is certain the furniture is worth a lot. Based on their long history together, she is equally certain her husband will do a lousy job of negotiating its worth. These are clearly old battles between the pair, and wearily they go at it.

But for the arrival of the 89-year-old appraiser, Solomon (Alan Mandell), Act I is a dreary space. In director Garry Hynes’ vision, there is little energy in the couple’s conflict; what energy there exists is sapped by the ever-present hint of Valley-girl sound in Burton’s plaints. We are to believe she is ready to give up on the marriage but have the sense they have been here before. Enter Mandell, with 80 years of acting experience, I kid you not. He brings to life the Russian/Jewish appraiser, an immigrant tottering on his last legs with the acumen and humor that undoubtedly had carried Solomon across borders and seas. In Act I, Mandell’s voice is too soft, but each line is a zinger, perfectly evoking memories of my grandparents’ generation. Not only is he energized by the prospect of acquiring the furniture, he sizes up the family dynamics, dispensing little gems of observation and wisdom.

Enter self-assured, prominent Walter, who has not spoken to his younger brother since their father died. The stage is set for Act II. Stretch your legs and return. This is why “The Price” has not disappeared from theatrical repertoires for 47 years. This is where it becomes more than just another saga of long-running marital friction. This is where it comes to life. The family conflict that can rise to the surface when a parent dies is legendary, be it fictional, as in “The Price,” or factual, as in Phillip Roth’s “Patrimony: A True Story.” In both cases there is a gulf between the financial and achievement statuses of two brothers. In Roth’s own story a mustache cup becomes the focus; for the Franz brothers it is the furniture that neither really wants. Objects become infused with meaning; old floodgates of bitterness are opened.

Dapper, camelhair-coated Walter, after the loss of his family because of his singleminded focus on success, and having survived a three-year mental breakdown, uses the occasion of the final sale of the last tangible remnants of the family to come bearing what he hopes will be an olive branch. Victor, wearing his policeman’s uniform and years of resentment for how he put aside his own ambitions, and how his brother has abandoned him, has no interest in either the money Solomon is offering or the supposed peace treaty. Life is not that simple. He is not ready to sweep history away even if once again it will mean lost opportunity. They have conflicting memories and had conflicting experiences with their patriarch. Solomon has been dispatched to the bedroom while the brothers hover between reminiscence and resentment, ultimately settling on the latter. Solomon wafts through now and then, ignoring personal boundaries, with pearls of wisdom and his eye firmly on the potential bounty. He may not be one of a kind, but he is one of the last of a generation.

89-year-old Alan Mandell is reason enough to buy a ticket. Were this Japan we would label him a national treasure. But there is more. Miller has perfect pitch for the conflicts that tear apart relationships. Yes, Act I drags and is not helped by Hynes’ direction, but let loose in Act II, Robards and Burton come to life, Mandell is clear as a bell and “The Price” at the Taper is definitely worth the price of admission.