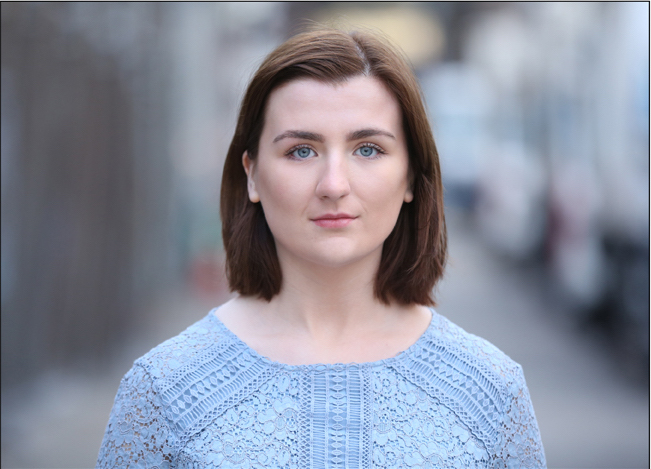 Irish Repertory Theatre’s revival of “Pumpgirl” recently opened to rave reviews, with critics praising the performance of Labhaoise Magee as the title character.  A heart-wrenching drama set in a remote Northern Ireland town, the play is directed by Nicola Murphy and follows a form familiar to fans of Irish playwriting: the actors perform in a monologue structure. This conceit beautifully highlights the sense of isolation that the three characters experience, as well as allowing the time for the writing of playwright Abbie Spallen to feel fully fleshed out and expressive.

The eponymous Pumpgirl is in love with Hammy, the local lothario, despite the fact that he does not reciprocate her romantic feelings, using the affair simply to feed his ego (and probably combat the boredom of rural life.)  His rejected wife, Sinead, deals with her frustration by finding a lover of her own.  The three actors sublimely tap into the heartbreak and loneliness of their situations.  Following the excellent reviews for the actors and production—and very strong word of mouth, Irish Rep extended the show’s run by two weeks to January 12.

We chatted with Labhaoise about her role, Irish theatre, and her advocacy on behalf of artists with disabilities.

Can you tell us about your background? Where you born in Ireland?

I was born and raised in Derry, Ireland. I grew up on the outskirts of the city, just over the border of Derry/Donegal. When I turned 18, I received a scholarship to attend college in America and I attended Sarah Lawrence College in New York.

You moved to the United States to go to college – why did you want to school in America? When did you decide to become an actor?

I always had my heart set on living in the U.S at some point. My mother was born in Maumee, Ohio, but her family returned to Derry when she was very young. I was attracted by the liberal arts colleges and opportunities for a career in the theatre. I applied to many schools in Ireland, Scotland, England and America, but ultimately, I found the deepest connection with Sarah Lawrence. I’m incredibly grateful for my years there. I explored becoming a professional actor during my sophomore year of college. I was offered a role in a feature film shooting in the spring and I decided to take a semester away from campus to see what it was like. I’ve never looked back!

What attracted you to this particular play? Were you familiar with the play before you joined this production?

The writing. The play is remarkable. It takes you on such a sensory journey – the words leap off the page. I wasn’t entirely familiar with the play before reading it, but when I realized it was set in Northern Ireland, only an hour away from where I grew up, I knew I wanted to do it. Abbie’s writing fully encapsulates the distinct sense of humor and loneliness of small-town rural life. I can’t say enough how much of a joy it is to work on this material. Every performance is exciting, and we owe so much of that to Abbie.

Are there any characteristics that you share with Pumpgirl? What have you found in the character that you can relate to most?

Pumpgirl is a force of nature. She’s no-nonsense, astute, brimming with life and moves through the world with an enviable wit and ease. I relate deeply to her innate sense of survival. Her instincts are fierce, as is her loyalty to those she loves. She’s much more bold than I am, and I’ve certainly become more confident since playing her. I love the tenacity and presence she brings to me as a performer.

What was Nicola Murphy like as a director? Did she give you any interesting advice to help you develop your character?

I can’t imagine any other director I would rather have led this play. Nicola is an incredible talent and I am forever grateful for her work on this show. She has an effortless way of making everyone in the room know that they are an important part of a collaborative environment. I’ve never felt so valued and trusted as I was in Nicola’s rehearsal room. She allowed us to try and fail and try again, and in one sentence would make sense of the most impossibly challenging moments of the play. I respect her so much.

Most of the Irish theatre we see in the U.S. are heartbreaking plays of characters who lead lives of quiet desperation or they live in situations that seem hopeless and often lead to tragedy. Why do you think Irish playwrights are drawn to these stories?

It’s definitely a recurring theme with many Irish playwrights. However, I think I interpret it a little differently.  I think the integrity with which Irish writers approach the lives of people in these communities is what gives the plays such power. I think wit and humor is the secret sauce. They perfectly capture that enduring, bold love of life that sings to the soul of generations before us. It’s almost like it’s in our DNA. When I read these plays, which are often sad or lonely, I notice more the way we persevere and survive these things with optimism and love that you just don’t see enough of. While that may be sad, I think it’s one of the most beautifully accurate themes in Irish writing. I can picture so vividly my family, neighbors, and friends from home when reading these plays and I’m full of admiration for them. Life can often be about enduring and getting on with what you’ve been dealt, and I’m so proud to be from a place where writers and artists are keen to address the things we hold deeply within ourselves. The fears, insecurities, losses, and failures that live in all of us. Irish playwrights see them and make you love a character all the same. You’re rooting for them – even at their worst. I think it encourages us to make an effort to connect with the people in our lives that are the hardest to love.

Your bio mentions that you are passionate about advocating for artists with disabilities and brain injuries. Why did you decide to take up this cause?

In 2017, during my final semester of college, I was diagnosed with a brain tumor and due to unanticipated complications in surgery, I lost all feeling and sensation on the left side of my body. I had to re-learn basic independent movement and walking. I was only 20 years old and I thought I would never be the same again. However, with great counsel from doctors, family and friends, I realized my experience had a lot to offer not just myself, but my artistic community. I became ashamed of the ignorance I had held towards the struggles of disabled artists. It was painfully sobering and my path changed completely, along with my broader goals and purpose in the arts.

You recently did a tour of “Daniel Tiger’s Neighborhood,” a completely different experience than “Pumpgirl!” Did you enjoy touring? What cities did you visit?

I loved it! It was a world away from “Pumpgirl”and I had an amazing time on the road. It was my first time doing a musical and I was really nervous, but I actually surprised myself and had a blast with everyone. We visited over 40 states and stopped in almost every major city along the way. My favorites were Seattle, Burlington and Boise. I recommend touring for any actor, it’s a fantastic experience!

“Pumpgirl” runs at the Irish Repertory Theatre in NYC through January 12, 2020.