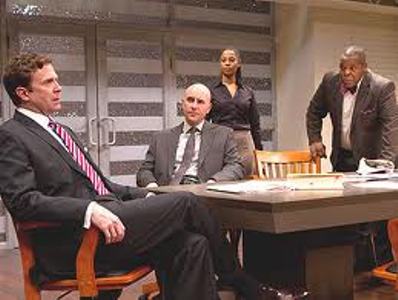 By David Mamet
Directed by Scott Zigler
The Philadelphia Theatre Company
Through Feb. 20, 2011

The buzz on David Mamet’s “Race,” at the Philadelphia Theatre Company, is that it dissects the state of racial relations in America. Two generations after civil-rights victories, it surveys the realities of unresolved racial divides among whites, blacks and peripherally Jewish and Hispanic Americans. Ambitious material indeed.

On the surface, the play is a bloody-knuckle drama about a rich white executive accused of raping a black call girl. The set-up is intriguing, but eventually it turns into a Mamet theatrical meat grinder—more “CSI” than Lorraine Hansberry.

The promising opening throws us in the middle of lawyers interrogating Charles (John Preston) a prominent white executive who is acting guilty, but proclaiming his innocence against a rape charge. Jack (Jordan Lage) is the white 30-ish hotshot attorney who has the best legal game in town. Henry (Ray Anthony Thomas) is the veteran black lawyer who seeks both truth and justice even as he plays the hardest ball. The partners bring in Susan, a talented African American junior partner, as part of the legal team (with a level of visual strategy), to work on the case. What they don’t know is that she has her own agenda.

The dialogue in the first act is dazzling Mamet noir, with blistering lawyer-speak that reads authentic (even if is dodgy on legal protocols) and the situation has a visceral punch. Expectations are raised early, so it’s doubly disappointing when things get clammy. Everything gets thrown on the table, as the characters reveal their pent-up prejudices. As the team dissects the evidence, tempers flare and the action circles back to Mamet’s ranting polemic about racial inequities, reverse discrimination and any number of whole-cloth issues.

At its best, “Race” confronts the post-PC social mores that have made a true dialogue about race even more polarized. We are challenged to confront our own prejudices as the evidence of the case shifts; guilt is passed around to individuals, to communities, to races. But as much as the play opens these vital issues up, the characters remain sketchy and the voice of the playwright becomes the main character. Director Scott Zigler and the cast do what they can with this myopically frenzied approach.

Thomas gives a jaded tenderness to his Henry, who is old enough to have seen, heard and felt all the poisons of racial hate. Charles, the accused, is so bizarre, cloyingly vague, yet Preston keeps him completely buttoned up, to a chilling effect. Lage’s Jack mixes brio with passionate conviction. Susan is drolly underplayed by Nicole Lewis. The side plot about Susan being hired by Jack after he knew she lied on her job application is the most character-driven moment in the play, and it’s well played by Lage and Lewis. This engaging scene is vintage Mamet.