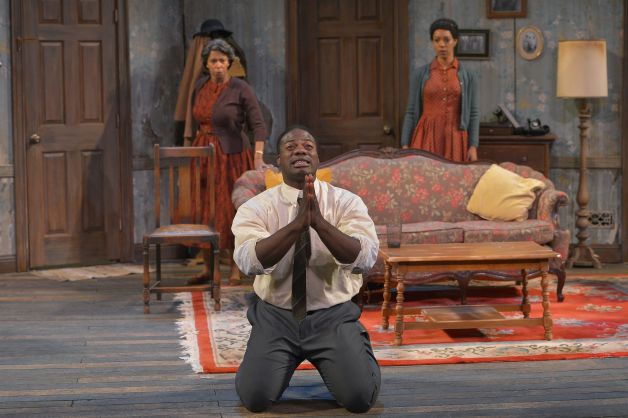 From left, Margo Hall, Marcus Henderson and Nemuna Ceesay in "A Raisin in the Sun"
© California Shakespeare Theater. Photo by Kevin Berne

It has been more than half a century since Lorraine Hansberry’s iconic “A Raisin in the Sun” first took the stage, for those who saw it changing the way white America viewed the upward struggle of their African American neighbors. Well, not exactly neighbors back in 1959 — that’s what the play is about. Undeniably much has changed for people of color since then, and yet this classic tale of high hopes and frustrated dreams still resonates and, for many, is still taking place. The more things change, the more they stay the same?

Incisively directed by Harlem-based Patricia McGregor (“Spunk” at Cal Shakes), the story of the Younger family — the upright feisty matriarch Lena (the fabulous Margo Hall); older son Walter Lee (Marcus Henderson in a strong portrayal of the character Denzel Washington is now playing on Broadway), frustrated in poverty and daring to dream big; his patient, loving but equally frustrated wife Ruth (a lovely Ryan Nicole Peters) and the acerbic sister Beneatha (Nemuna Ceesay), who provides many of the laughs as she searches for her real self — unfolds seamlessly on a stage more used to Shakespeare. No incongruity here. The tragedy of the Youngers, the low comedy and the triumphant but uncertain resolution are fit company for the Bard.

Location, location, location. The Youngers have been living for decades in a rundown ghetto apartment where the wallpaper is peeling, the roaches are running across the floor and the youngest, 10-year-old Travis (Zion Richardson) sleeps on the living room sofa. But things are about to look up. Walter Sr., having worked hard all his life, has died, leaving his widow the beneficiary of a $10,000 insurance policy. She is determined to use it to get out, putting money down on a house in a white neighborhood. Walter Jr. has different ideas. Fed up with his dead-end chauffeur’s job, he wants to open a liquor store with a couple of buddies. The insurance money represents a different kind of key to open a door to a new life for each member of this beleaguered clan and therein lies the tale.

Performances are fine. Henderson is strong in the lead role that made Sidney Poitier a star back in the day. Hall is perfect as the stoic matriarch, a bit of a tyrant but on the benevolent side. Peters’ portrayal make you ache for Ruth, who spends her days ironing and cleaning other people’s houses and her nights watching her husband grow more and more distant from her. Ceesay makes the college student Beneatha truly funny and recognizable as she tries on different philosophies and career paths like so many dresses. Even her suitors — York Walker as the entitled “rich boy” and Rotimi Agbabiaka as a Nigerian revolutionary — are well cast, as is Liam Vincent as the uptight emissary from a neighborhood association that does not want these people to move in next door. The cramped apartment set is by Dede M. Ayite and costumes by Katherine Nowacki.

Any current production of “Raisin” is particularly interesting in light of Bruce Norris’ 2010 triple-threat (Pulitzer, Olivier and Tony Awards) imaginary sequel, “Clybourne Park.” Set 50 years later in the same Chicago enclave, now a hotbed of gentrification, that play deals with a white couple buying the old Younger residence with a whole new set of repercussions for the neighborhood. The more things change, the more they stay the same.