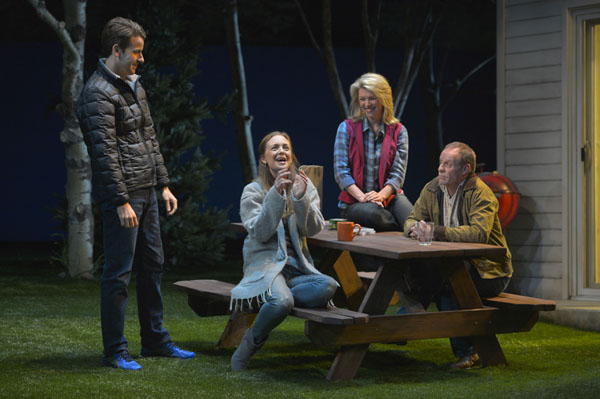 There is a lot of depth to be found in banality. Especially if you dig under the dialogue of a Will Eno play. A master wordsmith, Eno keeps things simple, accessible and really funny, while hinting at the big questions and immutable truths that define our humanity.

Which brings us to “The Realistic Joneses,” on the surface a comedy about two couples who happen to share a name — and a debilitating disease — living in adjacent homes: one long-occupied, the other hastily rented to be near a medical specialist in the aforementioned illness.

But, for all the laughs — and there are plenty — there is a great deal of sadness going on in these sylvan backyards. And fear. And loneliness. And, as the four Joneses look up at a starry sky, sipping their wine and talking about apparently nothing, it seeps through.

This very good play, now at American Conservatory Theater, is masterfully directed by Magic Theater head Loretta Greco, who keeps things ultra-casual on the surface, the better to let the deeper strains of meaning seep through. The actors are pitch-perfect and the set, by Andrew Boyce, switches nicely between both houses and the only wrong note is the use of LED lights for the very prominent stars that loom over the scene. But maybe that’s a metaphor — with Eno, you never know.

At the erratic beating heart of things is Rebecca Watson as Jennifer Jones, a woman in midlife whose husband, Bob (an acerbic Ron Gnapp, as good as he ever has been), is dying of a rare and incurable disease. Jennifer, perhaps the only realist in the joint, is stoically managing her husband meds, moods and doctor appointments, while trying to hold herself together in the face of a calamity which, for all her cool efficiency, she can’t quite face. In addition, she is unsure of her husband’s love. He’s a man of few words, none of them particularly tender. “Do we talk or just throw words at each other?” she asks him.

It doesn’t help that he has developed an interest in the girl next door, a young woman strangely named Pony (Allison Jean White), who drifts dreamily and ditzily around the place without seeming to have a cogent thought in her head (“I really don’t have an attention span,” she says at one point). But Pony does have a nagging sense that something’s wrong. And it is. Her own husband, John (James Wagner), has the same affliction as Bob. Difference is, he hasn’t told her. Unlike the competent Jennifer, Pony might not be of much use even if she was aware … but then again, she might.

The couples meet on a starry night soon after the younger Joneses move in and come over to Bob and Jennifer’s yard bearing a bottle of wine from somewhere “just outside Europe” according to Pony. They make the usual small talk and the 90-minute, intermission-less play proceeds from there, with blackouts marking the swift scenes that pair John and Jennifer in a confessional kind of mother-son talk, the two men in a mild macho competition and, most disastrously, the young Pony and the older Bob in a wrongheaded sexual encounter.

And, in between, the quartet of Joneses regularly meet in the backyard and speak of simple things while that sky hovers above them and the inevitability of death lurks below. It’s quite wonderful and very real, in a surrealistic way.