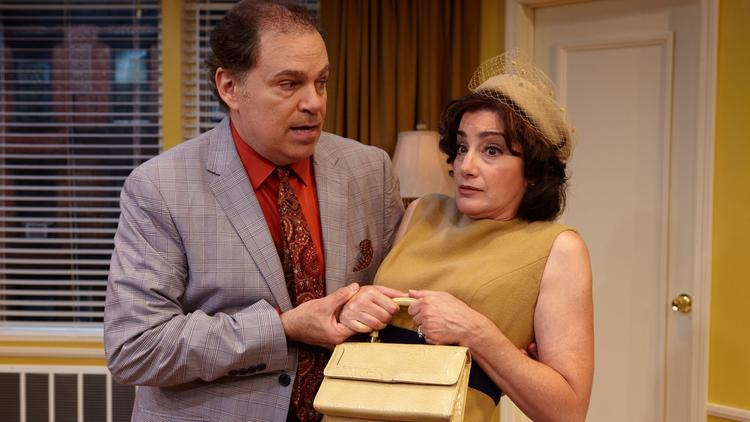 Phil Johnson (Barney) and Sandy Campbell (Jeanette) in "The Last of the Red Hot Lovers." (Photo by Aaron Rumley).

A middle-age man, who runs a seafood restaurant and drives a Buick in the Age of Aquarius, clumsily tries to join the sexual revolution in “Last of the Red Hot Lovers.”

Barney Cashman (Phil Johnson, in a boffo performance) is the quintessential nice guy bored with his marriage and predictable existence. Worried that this may be all life holds, he hankers for an affair and sets out to seduce three women. A cascading series of comic errors follows.

First up is Elaine (Katie Karel), a sultry restaurant regular who regularly strays from her marriage for encounters without emotional baggage. Barney, navigating without a map, endlessly tries to steer her into soulful conversations with the goal of having a meaningful relationship. Elaine responds by draining a bottle of scotch and heading for the door.

Next is Bobbi (Noelle Marison), a would-be actress from California who Barney met on a park bench. She’s vibrant and airy and, unfortunately, dangerously unbalanced. Marison gives a mesmerizing performance showing versatility not only in her precisely timed delivery but also in what her rubber-band body is capable of as she fluidly executes dance stretches, yoga poses, the splits and other mind-boggling moves, none of which lead her into Barney’s arms.

This brings us to Jeanette (Sandy Campbell), his best friend’s wife whose interest in Barney is fueled not by lust but anger against her husband who recently confessed his unfaithfulness. To say Jeanette is conflicted about being alone with Barney is an understatement. She walks in with shoulders hunched up to her ears and tightly clutching a structured purse in front of her like a chastity belt. Barney would have an easier time wrestling a handbag away from the Queen of England.

Some Neil Simon plays have aged better than others: “Last of the Red Hot Lovers” falls in the latter category with a handful of racist jokes, and a lengthy marijuana-smoking scene that harkens to “Reefer Madness.”