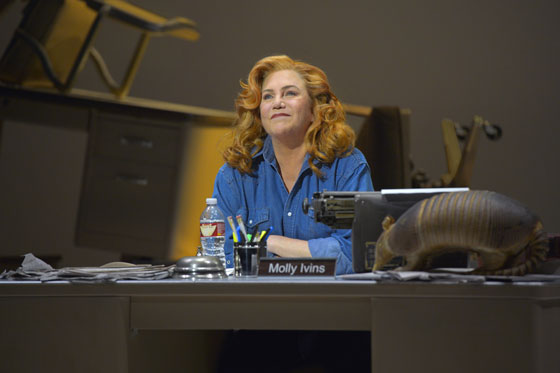 Kathleen Turner in the title role of "The Kick-Ass Wit of Molly Ivins"
© Photo courtesty of kevinberne.com

By Margaret and Allison Engel

Molly Ivins deserves better. “Red Hot Patriot: The Kick-Ass Wit of Molly Ivins,” Kathleen Turner’s one-person show (except for a copy boy, Michael Barrett Austin, who silently wanders in and out, handing her dispatches from the AP wire machine that are mostly about past events in her life), while it gets off the ground, never soars to the heights of the celebrated journalist’s pungent, pithy prose. Perhaps because “Patriot” essentially is a compendium of excerpts from that prose, witty one-liners without much of a through-line to hold them together. Or maybe it’s because Turner, delivering them in a husky baritone, falls into a cadence that quickly becomes monotonous, never fully inhabiting but impersonating her subject.

Ivins, a six-foot-tall red-haired avowed liberal, died of recurring breast cancer in 2007 when she was in her early 60s and at the height of her fame (she was syndicated in more that 400 papers). Unmarried and childless, she left a rich legacy of words — funny, biting, outraged, caustic words. It is these, as the title implies, that co-playwrights Margaret and Allison Engel aim to celebrate in this 70-minute homage.

They do get the funny down and there are a lot of laughs in the show (on the alleged stupidity of her fellow-Texans: “Can you believe God gave me all this material for free?”) or the upside of her lifelong drinking problem or her dog, deliberately named “Shit” so she could shock the neighbors when calling him in for supper. The serious stuff — Viet Nam, the Constitution, freedom, her parents (a lot of trouble there), her lost loves, her cancer and Republicans (especially the two Bushes George) — fares less well, especially at the end, which turns into a liberal screed.

As she reminisces, she wraps her memories in the rough blanket of her autocratic father with whom she was at lifelong odds. It’s not enough to either humanize the character of hold the show together.

Directed by David Esbjornson, with a cluttered newsroom set by John Arnone and scenic projections by Maya Ciarrocchi (mostly childhood photos and Texas politicians), “Red Hot Patriot” is not a bad show, merely an insignificant one. People will come to see Turner (nothing like a famous movie star to sell tickets) and leave not much wiser than before.

Molly Ivins once said “My legacy will be in helping folks be a pain in the ass to those in power.” Perhaps so. It certainly won’t be this show.