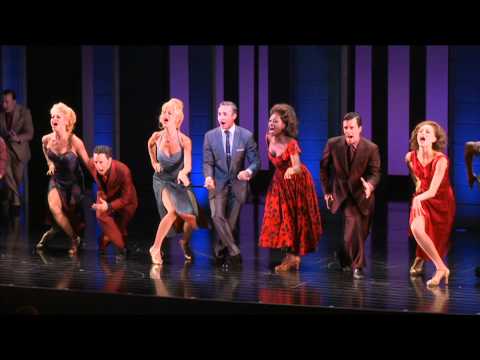 Robin and the 7 Hoods

Set in Chicago in 1962, “Robin and the 7 Hoods” is a fun, safe romp down memory lane. Bound for Broadway, this world premiere combines the plot of the Frank Sinatra movie of the same name with the songs of Sammy Cahn and Jimmy Van Heusen. If you’re older, you know every song by heart, and if you’re younger you should at least recognize them.

Billed as a modern take on the Robin Hood legend, the show is more hood than Robin. Eric Schneider plays Robbo, a man with a criminal past who wants the world to believe he’s going straight and has no intention of doing so. Robbo is being squeezed by big-time gangster P. J. Sullivan (Rick Holmes), who keeps sending Lieutenant Nottingham (Adam Heller) to shut down Robbo’s club. To get back at Sullivan, Robbo devises an elaborate, perhaps farfetched, plan to (you guessed it) steal from Sullivan and give to the poor.

Meanwhile, muckraking television personality Marian Archer (Kelly Sullivan), who is on a crusade to take down P.J. Sullivan, meets Robbo and finds both love and the means to get rid of P.J. for good. Sullivan (the actress not the hoodlum) is outstanding as Archer, portraying an aggressive journalist suffering from in-over-her-head naivete.

A note on casting. The Globe seems eager to highlight that Robin shares the time period with the hit TV show “Mad Men.” If so, Schneider’s Robbo evokes Pete Campbell more than Don Draper.

Of course, the music is the real star. Standards like “High Hopes,” “Come Fly With Me,” “All the Way” and “My Kind of Town (Chicago Is)” make you forget the wafer-thin storyline. However, the book by Rupert Holmes melds the action almost seamlessly with the music. The choreography is a bit pedestrian, with the exception of an outstanding tap number, and there are times when the Old Globe stage seems just a bit crowded, but with all those catchy tunes, I’m not sure any of that really matters.

The show is directed and choreographed by Casey Nicholaw, who succeeds in making this a fun ride. There are times when the cast seem to be saying: “Wanna sing another song? Sure why not?” The show gets extra points for not taking itself too seriously.

The costume design by Gregg Barnes is mostly functional, and intentionally over-the-top at times. The set design by Robert Brill evokes the muscularity of Chicago architecture.

Bottom line: Who cares about the plot? What’s not fun about lyrics and music by Sammy Cahn and Jimmy Van Heusen?