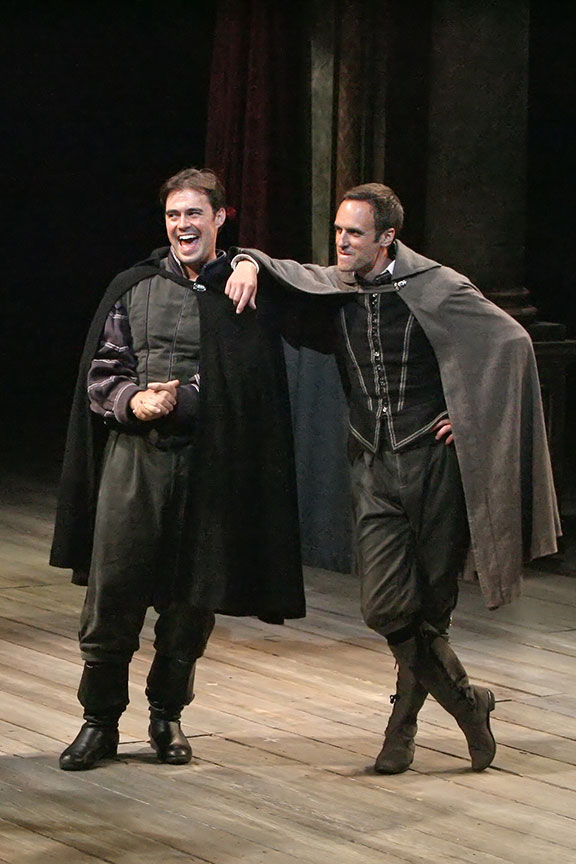 ‘Rosencrantz and Guildenstern Are Dead’

“Rosencrantz and Guildenstern Are Dead” is alive and well at The Old Globe Theater.

Written nearly a half-century ago, this absurdist, existentialist tragicomedy feels remarkably fresh as it re-interprets “Hamlet” through the eyes of two of its minor characters: The ill-fated courtiersRosencrantz and Guildenstern who stumble about unaware of their scripted lives, wondering where they are, what they have been sent for, and why they can’t remember anything that happened before the play began.

Under the rock-solid guidance of Shakespeare Festival Director Adrian Noble, this entertaining romp takes place in a parallel universe in which major characters from “Hamlet” drop by, enact brief scenes fromthe original work, and just as quickly depart. Rosencrantz and Guildenstern are left to puzzle out “what the heck just happened?”

Suffice to say you’ll find yourself in a deep rabbit hole without some familiarity of “Hamlet.” But you need not be a scholar of the Bard to fully appreciate “Rosencrantz and Guildenstern Are Dead.”

What you will appreciate are engaging, akimbo, split-second-timing performances by John Lavelle and Jay Whittaker as Rosencrantz and Guildenstern, respectively. Or is it the other way around? One cannot be certain. From start to finish, it’s a verbal shell game that keeps the audience guessing and, at times, even confounds the characters on stage.

Enter a troupe of actors, known as the Tragedians, whose leader is called The Player (in a commanding performance by Sherman Howard). Guildenstern complains to The Player that he and Rosencrantz have no idea what is happening at Elsinore Castle and no clue what they should be doing there. There’s comfort in hearing The Player say: “Uncertainty is the normal state. You’re nobody special.”

Keep an eye on the Tragedian character Alfred (Stephen Hu), who, although mute, manages to steal several scenes.

At times, a film crew inexplicably follows the actors about the stage. Hamlet stops to mug for the camera. Well, of course, he does. In a shipboard scene, three barrels on deck routinely swallow and disgorge players. Oh look! There’s Alfred, again!

Elizabethan costumes by Deirdre Clancy are opulent as well as gravity defying, with cantilevered skirts and cartwheel ruff collars that could double as satellite dishes. Lighting design by Alan Burrett and sound by Dan Moses Schreier are the final elements perfectly in place.

“Rosencrantz and Guildenstern Are Dead” is performed,through Sept. 26, in repertory with Shakespeare’s“A Midsummer’s Night Dream” and “The Merchant of Venice.” This summer marks Adrian Noble’s fourth and final season as artistic director of The Old Globe’s Shakespeare Festival.

Get thee to the box office.