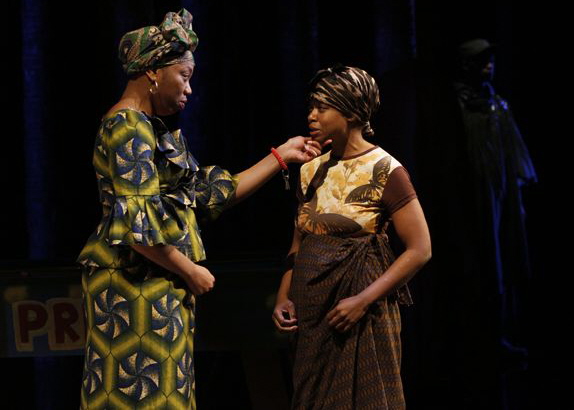 “Ruined” has opened in Los Angeles as a certified success, having already won the Pulitzer, an Obie, and a myriad of accolades. It packs a wallop. Richly staged, well played, and tearing at the guilt strings, this is not theater for the faint of heart. It is about women in the Congo who have suffered multiple brutal rapes, and the ones among them whose rape was by bayonet; hence they are “ruined.” They are not even good for prostitution. Once raped, whether or not they are “ruined,” women are rejected by their village, their family, and their husbands. They must fend for themselves in a brutal society where no one’s life has value and the army and rebel militias run rampant. Violence is the law of the land, allegiances shift, and the fighters themselves only possess a vague sense of what they are fighting for or against.

Mama Nadi’s bar and bordello has strict standards. It sits in the middle of the jungle and hatred. Everyone who comes to Mama pays, regardless of rank or faction, and bullets are parked at the door. Who enforces this? Mama Nadi, of course. She presides over the tawdry scene by virtue of her loud, brusque, and bossy manner. A full-figured, middle-aged “business” woman with a sense of purpose, she protects her little territory with animal ferocity and shows no mercy to patrons or girls alike. Not afraid to break up physical altercations, she is powered by feelings of success and fierce self-sufficiency. This is her business. In a way, she is a feminist. She built the business herself and she will defend it before anything else in the world. Portia (the actress goes by a single name), who played Mama at the Manhattan Theatre Club and the Intiman Theatre (Seattle), is marvelous as the proprietress. Her booming voice and self-confident manner manage to bridge any incredulity that she would be able to have any control over the rough patrons, let alone the hopeless girls. Mama Nadi is the only protection they have; her brothel offers a strange sort of refuge.

Christian (Russell G. Jones, who originated this role) is an itinerant trader who cycles through when he can get past the armed soldiers on the road. He brings her supplies, such as cigarettes, over which they always barter and bicker. They are old sparring partners and clearly enjoy the spar as much as the final deal. He has three girls in his truck he wants to peddle to Mama. She only wants one as she already has 10 working for her, but he brings in two, tightly holding hands. They are from his village; one is his niece, and his motives are mixed: profit and protection. His niece Sophie is a beautiful and fragile 18-year-old. She was planning to go to university. She has a painful limp and the appearance of a deer in the headlights. Mama Nadi senses at once that she is “ruined” and therefore useless as a prostitute, but is finally persuaded by Christian because Sophie’s appearance will bring the men in, plus Christian boasts that she can sing and be useful to the business. The other is sturdy, scared, and scarred Salima. She is the one Mama Nadi figures will do her bidding.

An aspect of “Ruined” that lets one classify it as entertainment is the music. Two musicians are often onstage. Their infectious rhythm and Sophie’s (Condola Rashad) lovely voice, along with the sexy, uninhibited dancing of the loose-limbed Cherise Booth, are compelling. Booth is a flirty prostitute, Josephine, who leads the soldiers on with hope that one day someone, perhaps the white trader, will take her to the city which she imagines as nirvana. Her confidence stems from being a Chief’s daughter, although she too has been thrown out of her village. Josephine relates to the newcomers like a competitive, jealous sibling.

Needless to say the bawdy peace of Mama Nadi’s bar cannot last forever.  As allegiances shift, and the conflict grows more violent, not even Mama can protect her turf.

Make no mistake: Despite the interjected humor, the colorful and authentic looking stage-set, and the entertaining music, “Ruined” is a tragedy. It is difficult at times to understand the actors through their accents, but the underlying message needs no translation.

Anyone who knows anything about the ongoing conflict will recognize what generations of brutality have wrought. Life is worth little, and the life of a woman even less. Brutality becomes an end in its self. As the characters become people rather than statistics, the horror is magnified. Based on the stories of real women as told to playwright Lisa Nottage, they are not ignorable. After finishing the run in Los Angeles, the production will travel to South Africa which has a large percentage of the Congolese refugees.