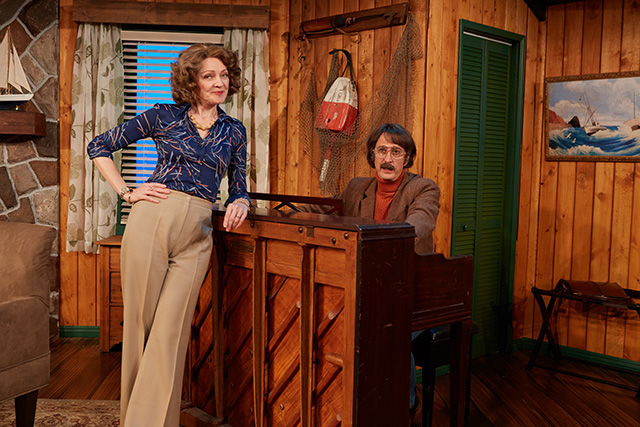 Two people away from home allow flirtation to lead to a fling. What should be a one-night stand instead stands the test of time in the romantic comedy “Same Time, Next Year,” at North Coast Rep.

We meet George (Bruce Turk) and Doris (Katie MacNichol) as they untangle bedcovers, round up jettisoned clothing and come to terms with guilt after waking up together in a guest cottage of a Northern California inn. Their angst, however, soon gives way to big smiles with the realization they really did have a swell time. Despite both being happily married, they agree to meet again the following year in the same room on the same weekend. George covers his track by telling his wife he’s on a business trip; Doris informs her husband she’s going on a religious retreat.

Six scenes (roughly five years apart) are snapshots in time during which the lovers get to know one another and themselves as they navigate the cultural norms and societal upheavals that characterize the 1950s, 60s and 70s. Because they have no communication whatsoever in the intervals between trysts, who the pair will find from year to year when they open the cottage door can be jarring. George goes from New Jersey accountant to high-income profession with a Beverly Hills address to mid-life crisis that lands him in analysis and behind a piano playing for tips in a cocktail bar in The Valley. Doris goes from Oakland housewife/high school dropout to Book of the Month Club member to Berkeley student/hippy to successful businesswoman considering a run for political office.

Over the course of a quarter century, George and Doris develop a deep emotional intimacy as they discuss their marriages (they genuinely like their spouses) and support one another through births, deaths and all the momentous events that affect and mold individuals.

That a 45-year-old play can still produce belly laughs is a testament to actors Bruce Turk and Katie MacNichol under the excellent guidance of director David Ellenstein. Married in real life, Turk and MacNichol are seasoned pros who nail an enormous range of emotions calling for dramatic pathos and split-second comedic timing. These two really should have their own sitcom.

Let’s hear it for hair-and-wig designer Peter Herman who coifs Doris in a weekly wash-and-set perm, Marilyn platinum tresses, a red-rinse ponytail, flower-power long hair and socialite big hair. George goes from regulation haircut to slicked back look and from clean shaven to push-broom moustache. There’s also a period during which George has to be drinking Grecian Formula given the intensely dark color on his longish locks.