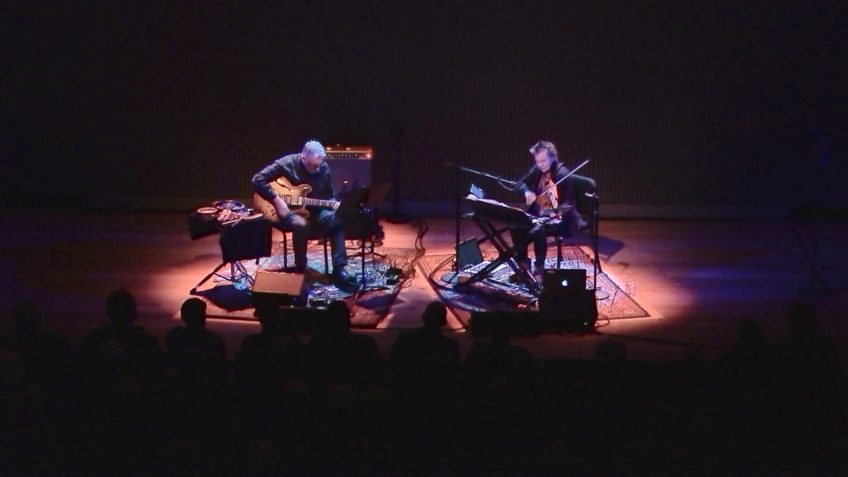 These now grey-haired icons sat side by side during the 90-minute performance, Anderson on her electronic violin and Frith on his retrofitted guitar with extra pick-ups and effect pedals. At times their playing sounded like a full orchestra on a carousel spinning backwards, at other times like the reverberation between clanging Tibetan bells. Anderson read her written words throughout, some from older works and some newer, always with her hypnotic, syncopated phrasing, whether leading to some ironic absurdity or punctuated with Buddhist philosophical sound bites.

A recurring theme in Anderson’s 40-year repertoire has been her fascination with dreams, as in her recent collaboration with the Kronos Quartet, “Landfall” (2018) and again in “Scenes From My Radio Play,” where she expresses her preoccupation and crusade to get people to stop sharing their dreams! Oh, the dread of having to listen to someone retell their dreams, fumbling through their confusion as they try to recollect something that wasn’t real to begin with, holding her hostage as they sort through these delusional realms and trying to give them meaning. Better to tell a story about a 90 year-old couple that commits suicide because they wanted to wait till their kids were dead… or offer tips from Jackie Kennedy on how best to smile—both of which Anderson does.

To her mundane stories that she seductively elevates to otherworldly, Frith simultaneously bangs his guitar that sits flat on his lap like a dulcimer. In classic Frith style he beat his strings with a shoe brush, tambourine, and drum brush, or plays them up and down as if giving his lover a back rub. As Anderson adjusts her electronic instrument and computerized soundboards, a snow of projected white polka dots cross the black stage. Above them more abstract black and white images etch themselves on an overhead screen, looking like freeway traffic lights at night seen from outer space, or the intersecting lines of the nervous system. At times black and white images of rain on a window defy gravity, dripping upwards.

“Scenes From My Radio Play” floats like a trance that will make you nod in a lofty meditative manner. As with much of Anderson’s newer work, like her film “Heart of a Dog” (2015), the highs and lows are subtle, without anthems like “Oh Superman” or “Excellent Birds.” Instead, her slight of hand improvisational technique, understated production and droll humor create an unpretentious, even tangible, field for meditation to disappear within.