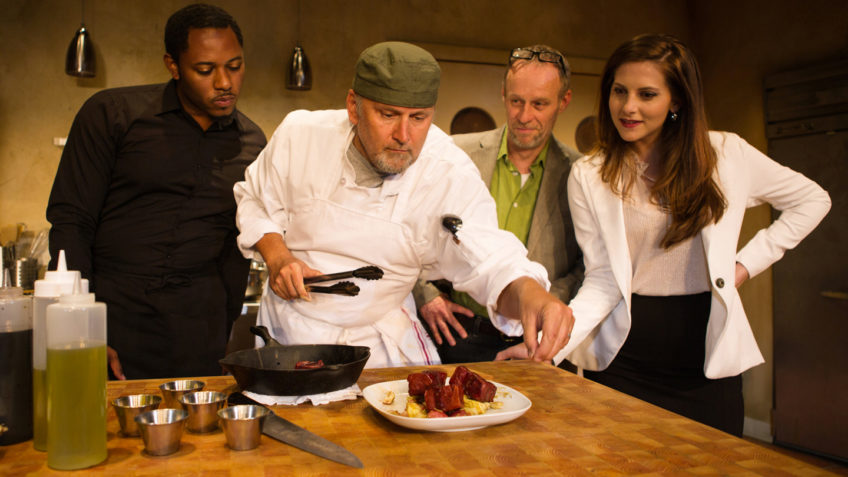 Here’s a play that could have turned into a yawner, but ended up as the opposite – engaging, vibrant, fascinating. The world premiere of Theresa Rebeck’s “Seared” at the San Francisco Playhouse (http://sfplayhouse.org/sfph/2016-2017-season/seared/), which commissioned the play, is yet another triumph for a small company.

The story of a brilliant chef pitched against egos and greed (disguised as “the need to survive in the real world”) indeed could have been a bore if Harry, the chef (Brian Dykstra), was a pure, noble genius besieged by evil, but when Rebeck – of “Seminar,” “The Scene” (which became the film “Seducing Charlie Barker”), and numerous other plays – is the author that won’t happen.

Instead of being a morality play or a “statement,” “Seared” provides unpredictable interplay and clash between characters who seem real, speechify only occasionally, and even continue to live in the mind after the final curtain.

Dykstra, who is said to have participated in the development of the play, seems completely at home in a the cramped kitchen of the suddenly famous Brooklyn restaurant, which received an unexpected mention in “New York” magazine. Dykstra’s Harry is effortless at juggling pots and pans and knives, but when it comes to dealing with people, there is plenty of strain and hot air. Mike (Rod Gnapp, speaking with a slow, deliberate, at times monotonous cadence) is Harry’s partner, responsible for the business end of the operation, and in constant conflict with the chef’s disregard of cost in the pursuit of excellence. Both characters are drawn well enough to make “Seared” a pretty good two-actor play, but Rebeck added two more delightful personas, pumping even more life into the work.

Once again, the author skirts disaster by introducing a know-it-all, “I’ll make your profits grow” consultant (boo, hiss!), but Alex Sunderhaus’ Emily is so real, so earnest that the audience is forced to forgive her for at least some of the hackneyed consultant-speech, and her expected drive to economize, “maximize income,” and rein in the profligate Harry.

And then, proving powerfully that there are no small roles, Larry Powell brings to life Rodney, “the” waiter (singular) of the establishment, caught in the struggle between “art and commerce,” exhibiting more warmth, humanity, and good humor than the principal players.

The end of the play is not entirely satisfying, but once again, it’s “real” and makes dramatic sense – I just wish for something more poignant and meaningful. Company co-founder and artistic director Bill English is largely responsible for the birth of “Seared,” which is sure to follow other Playhouse presentations to theaters as far as New York, and for the simple, effective scenic design. Margarett Perry is the director, juggling the action and the actors with the same speed and excellence as Harry handles ingredients for a great dish.

Just a whimsical addition in conclusion: if you remember how the lowly sardine became an essential component in “Noises Off,” you will appreciate the importance of scallops in “Seared,” edible marine bivalve becoming a key element in the plot.