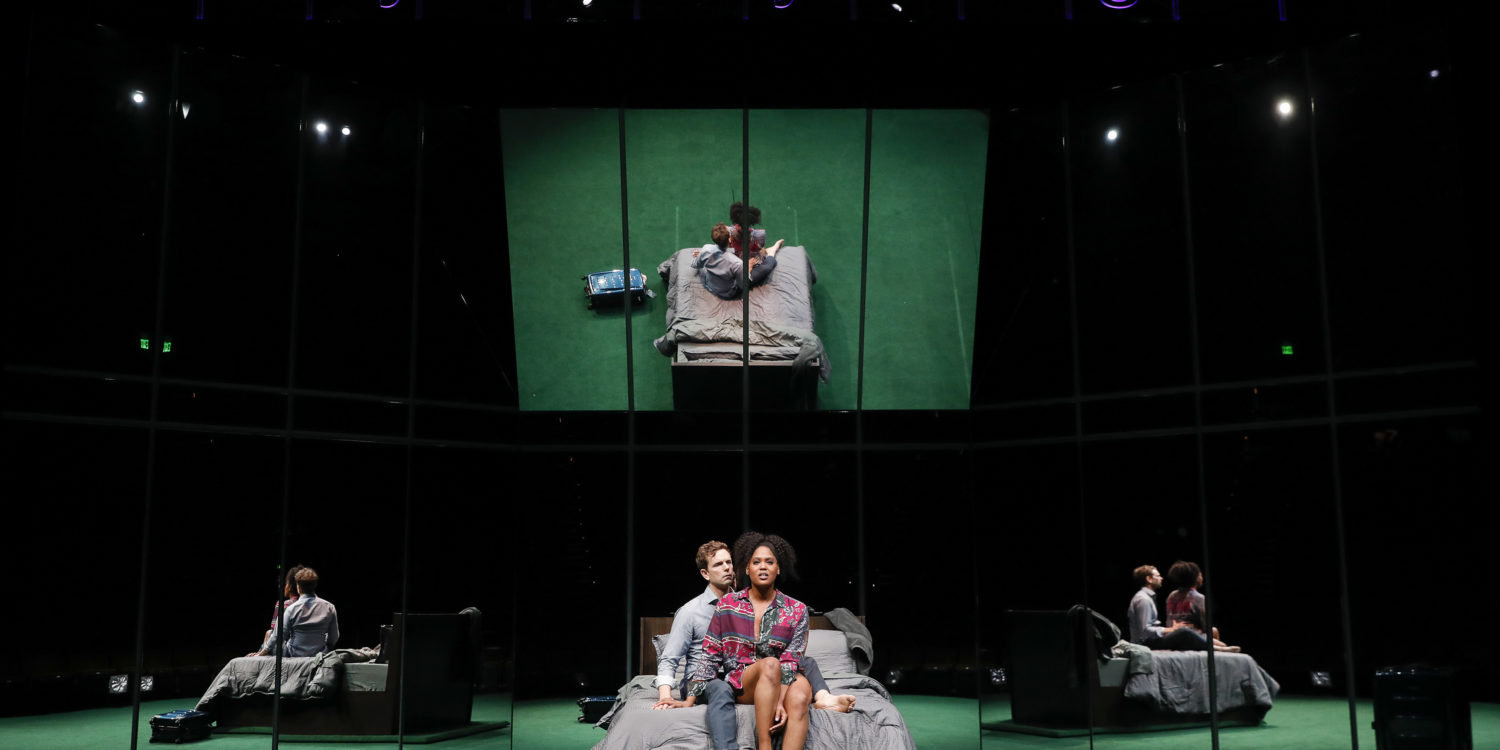 On Broadway “Slave Play” earned twelve Tony nominations – the most of any play ever — but did not take home a single award. What is going on? Playwright Jeremy O. Harris is yet another extraordinary talent to emerge from the Yale School of Drama. He deftly juggles multiple themes while never losing track of the goal to entertain. He is wok, all right, yet he manages to skewer bits of the party line.
All but one of the actors currently on the Taper stage come from the Broadway production. And the one man out? He was an understudy for that production.

Spoiler alert. If you want the full impact of surprise, and you have managed to miss any other discussions of the play, stop reading here. My bottom line is that I thought the writing and acting are superb. I encourage you to partake, with reservations. For a fuller discussion read on.

Three mixed race couples are participating in a retreat at a Southern plantation. Photos of the plantation flank the stage. They have been attracted by the title of the retreat, “Antebellum Sexual Performance Therapy.” Although “Slave Play” is performed in a single two hour act, the action has three distinct sections. It opens with Kaneisha (Antoinette Crowe-Legacy) scrubbing the floor in antebellum housemaid attire. Her endeavor is punctuated with twerking, definitely anachronistic but entertaining and firmly anchoring the action in the present. Despite her fake accent being difficult to decipher at times, she delivers a powerful performance. Jim(Paul Alexander Nolan), interrupts the scene to enact his right of domination as the overseer. As a participant, Jim is clearly less committed to the exercise than Kaneisha. The other two couples go through similar white/black dominance exercises. Phillip (Jonathon Higginbotham) is the self-proclaimed mulatto houseman to the demanding, provocative wife of the plantation owner, Alana (Elizabeth Stallman). The last is a gay couple. The white partner, Dustin (Devin Kawaoka) is an actor in real life. He throws himself whole-heartedly into the role of an indentured servant. His black partner, Gary (Jakeem Dante Powell) more reluctantly takes on the part of overseer of Gary; he is crushed in the process. In each couple it is clear that one partner is more fully committed to the role playing. It is also clear that the exercise is not without collateral damage.

The safe word is uttered and the two psychology graduate students, Yalies of course, self importantly burst in. Without a doubt this is their personal issue as well as their dissertation topic. Tea (Chalia La Tour) is a light skinned black woman with a mission to cram her theory down the throats of the participants. Patricia (Irene Sofia Lucio) is her light skinned Hispanic partner whose allegiance is to “processing” everything to the point that at least one subject justifiably explodes. This is where I took greatest exception to the play. As a psychologist and former clinical professor I would not have rubber stamped the experiment for the students. No question there are racial issues between the partners but to pre-judge them as the source of the whole relationship’s distress is unconscionable.

One of playwright Harris’s strengths is the humor he brings to the stage. The psychologists deservedly suffered the brunt of it. I cannot say that therapy has been unfairly skewered. All too often hairbrained ideas are presented as hard and fast rules. Sometimes the public is the victim. A more serious question in my mind is whether pushing the ‘conversation about race’ to the forefront in all situations creates an environment that is more damaging than constructive. The designated victim status in the three couples pushed aside other issues that undoubtedly ran just as deeply. Yes sex is more than just sex in a relationship, at the same race is not the root of all evil.

So, why did “Slave Play” not come away with any of the twelve Tonys for which it was nominated? Sorry I cannot help you. You will have to go see for yourself. You may have doubts when you emerge, but I promise you will not be bored and would wager you will spend time thinking about it in the days to come.