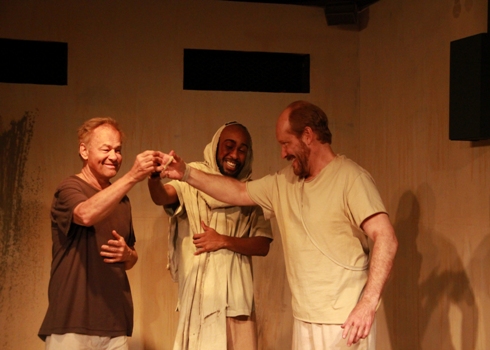 From left, Lloyd Pedersen, Evan L. Smith and Bert Emmett in “Someone Who’ll Watch Over Me”
Photo by Sherry Netherland

‘Someone Who’ll Watch Over Me’

Over the last 25 years or so, the Middle East – from Syria on the north to Iran on the east, Yemen on the south, Libya on the west and every other country in between – has seemed like nothing so much as a geographically large asylum for the criminally insane. It has been a wide swath of bombings (suicidal and planted), indiscriminate rocket launchings, mass shootings, air strikes, hijackings and kidnappings.

It’s also been a region where, more often than not, the innocent have had to endure the brunt of the anguish and suffering of these atrocities.

Cases in point: Brian Keenan, an Irish writer and lecturer at the American University at Beirut, Lebanon, kidnapped by Islamic radicals on a Beirut street in 1986 and held captive, under wretched conditions, for more than four years. And John McCarthy, a British newsman, also kidnapped by the same thugs just one week later and conjoined in misery with Keenan.

Keenan subsequently wrote “An Evil Cradling” about this experience, and McGuinness spun his play from the barbed-wire strands of this book, adding a third, fictional, character – an American doctor who’d come to Beirut for humanitarian purposes, only to fall prey to the same radicals.

At the start of “Someone,” we see just the Irish writer, Edward (Bert Emmett), and the American doctor, Adam (Evan L. Smith), each chained around an ankle to the cold concrete floor of a basement cell. It becomes clear they’ve been there for some time; Adam repeatedly warns Edward about re-telling tales he’s already told many times before.

Like a re-opened wound, these anxieties bleed anew when the radicals add Michael (Lloyd Pedersen) to the cramped cell. Older and more vulnerable than his fellow captives, Michael is a widower and out-of-work British educator who had jumped at the opportunity to tutor at a Beirut university – only to suffer the same fate. He is consumed by fear and worried about his aged mother, his only relative.

If there’s any antidote to imposed insanity, perhaps it’s a mild bit of self-inflicted craziness. The three prisoners do just that as they imagine – and act out – making a movie (Adam and Edward take turns as cameraman and performer/narrator), sitting at a computer and reading aloud the letter they’re writing to their loved ones or sipping pre-dinner cocktails, clinking their imaginary martini and dry sherry glasses.

It’s as fine a piece of acting as I’ve ever seen – their faces shine with the pretended pleasure of a cold drink sliding down their throats. Credit director Daniel for getting that just-right exquisite touch from three gifted performers.

Daniel also provides each man with his own characteristic tic that makes “Someone” a play rather than a staged reading. Adam does enough calisthenics – push-ups, sit ups, jumping jacks – to exhaust the most dedicated physical fitness buff. Edward is in constant, agitated motion to the length of his chain across the small, cruel space of their universe. And Michael folds and refolds his spare T-shirt and blanket almost robotically as he wonders how he came to this sorry state.

Note should also be taken of Gary Lee Reed’s set, as stark and bleak as the lives of the three men imprisoned there, and the scant but realistic costumes of Elizabeth Nankin.

The Lonny Chapman Theatre occupies a small, not-all-that-easy-to-find building in North Hollywood but it is decidedly worth the effort to watch “Someone Who’ll Watch Over Me.”