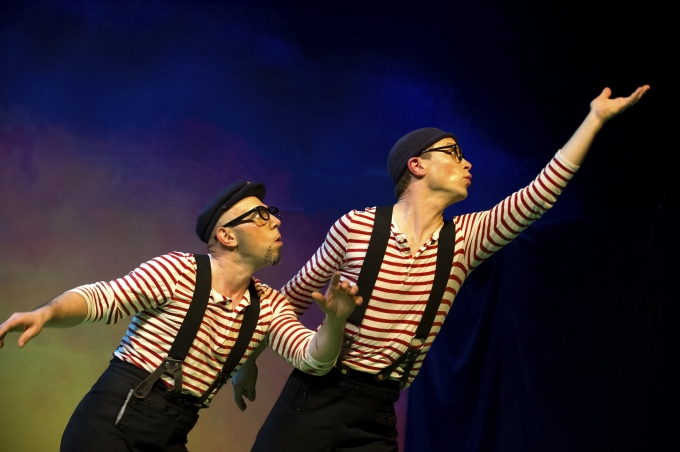 Bring your grandma, bring your kids! The occasional touch of blue or potty humor either will delight them or go right over their heads. So will performers Slater Penney and Jaron Hollander as they fly, climb or crawl through the audience at Aurora Theatre’s new, intimate Harry’s UpStage space.

There is no way to escape these two zanies as they chug along in a submarine that breaks down; swim through the fish-infested waters and wash up on a deserted jungle beach where they proceed to impersonate weird birds of prey, monkeys (ladies, watch your purses, a monkey-guy snatched mine and I didn’t get it back till the end of the show). They will sit on your lap, play with your hair, make virtual love to you and climb all over anybody in their path, regardless of gender. And it is hilarious.

These guys are inspired mimes and brilliant clowns. From the moment they walk down the aisle to the stage, dressed identically in the traditional mime red-and-white shirts with black pants and suspenders (their hats are different, but that’s one of the gags), people are laughing. Mimes they are, but noisy ones and the sounds they make, from sputtering engines to bizarre bird calls, are almost the best part of their comedy. They elicit noises from the audience too, at one point orchestrating an entire jungle’s worth of background music.

“Submarine” comes to Berkeley with solid credentials, having won Best of the Fringe Award at the 2011 San Francisco Fringe Festival and going on to this year’s FringeNYC. According to Hollander, who is head of the Kinetic Arts Center circus school in Oakland, another seven shows were subsequently staged off-Broadway before the Aurora stint. The Berkeley native says “Submarine” is “absolutely my favorite thing I’ve ever worked on.” And he’s worked on a lot, including Cirque du Soleil.

Partner Penney, a long, skinny drink of water next to the shorter, stocky Hollander, is no less impressive. He trained at the Dell’Arte International School of Physical Theatre after earning a degree in Theater Arts at UC Santa Cruz. He has an Emmy. He is the (sometimes) dumb guy, a perfect foil for Hollander.

Together they deliver a madcap hour of mayhem, exhibiting astonishing physical agility and improvisational skills. Sure, it’s silly. But inspired silliness is a good thing. Like I said in the beginning, bring your grandmother, bring your kids but, most of all, bring your funny bone. In these times of exploding cities, random gunshots and political pundits, it probably can use the exercise.