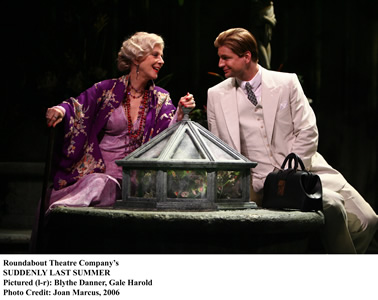 New York enjoyed outstanding theater during Fall of 2006. The city in this respect lived up to its reputation for having the most and the best theater in the world. We still tend to think of London in that category and that’s probably still true regarding the British tradition. But a huge army of actors, directors and other theater people camp out in New York putting the city on a high alert for theater. At a moment’s notice– well, almost, a producer can round up a professional show. At one point, The New York Times counted about four hundred shows running this year.

A beautiful presentation of Tennessee Williams’s Suddenly Last Summer, set in 1936 New Orleans, represented Williams at the top of his game. No one nowadays writes the formal structure that Williams used of “exposition, complication, crisis, and denouement.” It gave both distance and balance to a subject at once shocking and perhaps ultimately unplayable. The intimate moments are painful.

The action pivots on two women who shared the life of Sebastian, the dead poet: his mother Mrs. Venable (Blythe Danner) and his wife Catharine Holly (Carla Gugino). Basically a character play, its thin plot involves the mother’s discovery of a long- hidden truth about her boy poet. The mother speaks first, a monologue, about her job well done of protecting her son and his gift. The girl then regrets her inadequate protection of him. As she tells, with great discomfort, after marriage the boy’s instinctual life emerged at its most savage and hinging on his ultimate sexual experience of being devoured. He fantasized it, courted it, and used his wife to pimp for him on a public beach where poor, black boys played. They taunted Sebastian and victimized him. Mother had paid handsomely to lock the girl away in a nursing home and bury her secret. To no avail. She realizes listening to the wife’s tale that she too pimped for the boy in more socially elevated settings.

The sexual metaphor would have caused enough trouble for actors to get right in any period including our own. But a sense of subterranean connectedness among people and emotions, the web-like nature of experience that reaches out like moss on swamp trees to rot moral well being, this is Williams’s bedrock. Program notes suggest that current audiences are too sexually canny to be shocked by the play’s content. But that seems doubtful for similar reasons. Sensationalism was not Williams’s aim. He was tearing veils off of social piety at a moment when psychiatry was reaching a peak of popularity. It almost proposed itself as a spiritual cure-all displacing religion, the metaphoric point as I take it for the girl’s keeper at the “rest home” to be a nun. But the girl’s sexual education through marriage simply exploits a standard social convention of the virginal maid awakened by a conscripted hero-husband. Mother Venable (is this venal, venery, they all work) has no clue about her son and pays to keep the girl quiet in a distant sanatorium, which as much as says that she obviously knew on another level of consciousness.

The production played in low key for the script’s abounding ironies. The doctor called in by Mrs. Venable gives the girl a shot of truth serum so she’ll tell her secrets about the dead boy. Her recital of a typical day on the public beach where she “pimps for” Sebastian is quite as horrible to the audience as to the appalled mother. The set by Santo Loquasto in a mossy green looks more elegant than New Orleans or any place on earth could be, but that’s how much looks can deceive. Even the scrim of leafy trees dappled with soft light were indirect reflectors of a South that minded its manners, cared about maintaining a social decorum that distinguished sharply between public and private. When the girl shouts, Mrs. Venable shrinks with horror at the possibility that someone will overhear, a circumstance nearly as important as their topic.

In any case, leaving aside musicals, New York saw important revivals like Arthur Miller’s The Crucible and a version of Goethe’s Faust. Also, several new plays appeared on and Off Broadway. To notice just a few in no order of value, the remarkable History Boys by Alan Bennett brought a welcome wit and style New York. Talk plays like Bennett’s always have a more difficult time of it than not. There was the solo piece Wrecks by Neil LaBute, played by Ed Harris. The ordinary man stands in the funeral parlor near the coffin bearing his dead wife and talks about their marriage. The end of his tale is shocking, and won’t be betrayed here.

There were two good plays by A. R. Gurney, Indian Blood and Post Mortem, neither touched by the divine spark. And among comedies there was Butley, by Simon Gray, about the travails of a college professor. Played by Nathan Hale, the professor has wearied of professing and turns away a new student with a negligent wave of his hand. It is amusing and harmless as one of several such gestures that lent his character a gay dimension.

Michael Cumpsty offered a passionate version of Shakespeare’s Richard II, and still more so was Alvin Epstein’s King Lear. For sheer fun the Pearl Theater played Arms & the Man and the Roundabout offered Heartbreak House so audiences could move from one G. B. Shaw to the other. Many other shows around town performed the conventions to varying degrees of success. What drew attention to itself was not the music but the musicians of Company, who pranced about the stage with their instruments instead of sitting below stage and remaining invisible. It was a gimmick dreamed up by director John Doyle who has used it in other works.

What also tips New York into the number one spot on theater is “imports,” this year of an extremely high caliber. A first rate company this fall performed an impressive theater piece by Martha Clark based on several of Pirandello’s stories including “Kaos,” which gave the show its name. It was eloquently narrated in Italian by one off stage male voice while the company performed Ms. Clark’s choreography. A fresh Hedda Gabler was performed in German by well disciplined young actors who made the familiar play look and feel new.

As for the current “hit” The Vertical Hour, by David Hare, the principal actor Bill Nighy plays a medical doctor more mannered and cynical than those in the “helping professions” ought to be. Julianne Moore with glorious, long red hair seems to be uncomfortable onstage, or maybe just uncomfortable with the role. There is a credibility gap here, as one reviewer noted, between the glamorous woman onstage and the no- nonsense role presented. Ms. Moore plays a college professor passionately against the war in Iraq, where she served once-upon-a-time as a war correspondent. At the end of the play she decides to return to Iraq. By implication, a classroom in the US is too tame for her?

This list represents a brief survey and in no sense intends to be exhaustive. I list here also not-