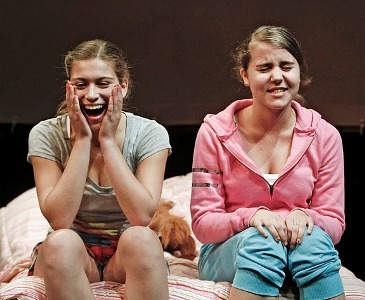 “Summer Shorts,” the festival of one-act plays now in its fifth year at 59E59 Theaters, sounds like the theatrical equivalent of beach reading—light, frothy, undemanding. It is not, and that’s a good thing. Familially related to Ensemble Studio Theatre’s widely admired annual one-act marathon, “Summer Shorts” thrives on the mixture of new and familiar playwrights, excellent actors, and emerging directors. Series A of this year’s festival hews to that tradition.

Three of the four plays on this smartly curated program revolve around the destructive myths (about men, sex, and relationships) that women—especially young women—struggle with and how those myths are culturally transmitted. Ruby Rae Spiegel’s “Carrie & Francine” portrays the friendship of two 13-year-olds who teach each other some of the many ways to grow up too fast: spout dirty slang, make yourself throw up, have sex you don’t really want. Mostly, Carrie (Lydia Weintraub) is the leader and Francine (Louise Sullivan) is the shyer, more frightened follower. The playwright, who’s 17 and receiving her first professional production, knows all too well what “Sex and the City” has taught girls like these, and she lays it out with disheartening honesty, virtually no moralizing commentary, and a fair amount of wit. “I like older guys,” says Carrie, “like Orlando Bloom.” Meanwhile, Francine has a dream that features not only vagina dentata but a vagina dentist. The shape and structure of the scenes impressively depart from convention, and Laura Barnett’s staging preserves both the play’s early-work lumpiness and its honesty.

Christopher Durang’s “Triple Trouble with Love,” which follows, consists of three insane monologues whose female characters are older but no wiser than Spiegel’s boy-crazy girls. Annie (Aidan Sullivan) sometimes calls herself Samantha and endlessly compares herself to Heidi Klum, driving away even men who like her and find her attractive, such as Gary (Nick Choksi), who doesn’t understand why she keeps referring to him as a hobbit. Jackie (Beth Hoyt) gives a brisk, cheerful account of her drug-addict husbands. Durang, who also directed, presents these three brief scenes as vaudeville sketches, complete with tight spotlights. They have very little to do with one another except Durang’s trademarks: a breathtaking boldness with formal narrative and an ability to make human despair look hilarious. Hoyt especially excels at the tricky task of making her character’s chaos seem sensible.

Alexander Dinelaris’s “In This, Our Time” is the most ambitious play on the program, three character studies and a couple of wildly complicated relationships contained in a few slice-of-life scenes with all extraneous explanation squeezed out of them. Much of the play focuses on 15-year-old Jules (played with a nice balance of smarts and awkwardness by Erin Darke) sitting at the kitchen table with Billy (Ted Koch), the homicide detective who is her mother’s latest soon-to-be-ex-boyfriend, working on a paper about the disappearance of the honeybees and discussing codependency as it occurs in adolescent romance. But really we’re seeing the single sane sympathetic relationship in Jules’s life—even with the unnerving sexual tension between them, Billy cares much more about Jules than does her mother Maggie (Maryann Towne), a flinty businesswoman caught up in sexual masochism with remarkably little self-awareness and an incomprehensibly serene form of nihilism. Like the previous two plays, “In This, Our Time” takes jagged, experimental shape, alternating between direct address and naturalistic dialogue. Jules is ostensibly narrating, and there’s a suggestion that she’s telling us a dream, but the last scene tips us off that it might be fevered memories from inside some coma induced by a suicide attempt. I appreciated the playwright’s off-kilter way of telling this story, which reminded me of Franz Xaver Kroetz with its blunt, unsentimental scenes. I found Towne’s performance almost frightening in its quiet blank fury, and I was tremendously moved by Koch, who combines intelligence, masculinity, and emotional availability in an astonishing and riveting performance, the evening’s best.

The fourth play of the evening, Neil LaBute’s “The New Testament,” is quintessentially LaButean: it depicts the brutish behavior of men; its premise is entirely bogus; its tale is entirely truthless. Writer (Jeff Binder) has written a play about the life of Christ, and Producer (Mando Alvarado) has allowed the play’s director to cast Actor (Jason Chen), who is Asian-American, in the leading role. Now the three of them are meeting at a café, ostensibly for the Writer to talk the Actor into taking a smaller role. But everything about the play is preposterous. In real life, this meeting would never take place. Playwrights have casting approval and don’t have to justify their choices; if a playwright objected to a casting choice, it would be the director’s job to break the bad news. LaBute’s nasty, pretentious play is an excuse for Writer to spew ridiculously clichéd racist remarks about Asian-Americans. It’s an excruciating, insufferable half hour in the theater. I’ve seen enough of his work now to declare that Neil LaBute is the worst frequently produced playwright in America. I don’t understand how this crap gets produced, except that he has a famous name (because of the dyspeptic movies he’s written and directed) and his scripts give actors big excuses to misbehave (Binder certainly goes to town in the nonsensical role of Writer). But as legendary casting director Juliet Taylor once said, “Actors look bad in bad things.”