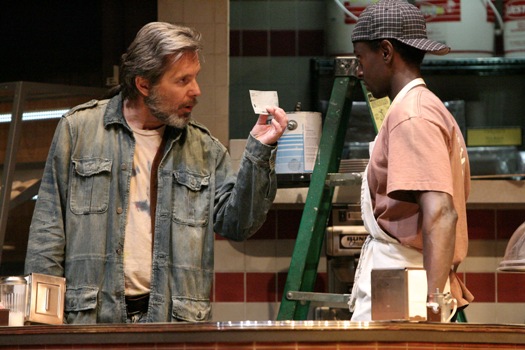 Sometimes life delivers up goodies. Take donuts, for example. For many, they may be a secret pleasure to be indulged in sparingly, but not so great in large doses. Modern goody manufacturers seduce with sweet and savory combinations like dark fudge or maple flavored with sea salt. Even a quick Google search fails to reveal an appetizing recipe for a donut that is both sweet and savory.

Substitute “comic and tragic” for “sweet and savory” and you will have an idea of the recipe Tracy Letts cooks up in “Superior Donuts.” Arthur Przbyszewski (Gary Cole), 60-year-old proprietor of “Superior Donuts,” the shop he has inherited from his immigrant father, a survivor of World War II. Central to Arthur’s life is the fact that, to his father’s scorn, he was a Vietnam draft “evader” who sat out that war in Canada gorging himself on books. The donut shop is on its way down, just like the Uptown section of Chicago where it is located. Aging, bedraggled, with a bit of a paunch, Arthur fits in perfectly as the perpetually depressed proprietor. His hours are erratic. With completely flat affect he ruminates to himself, and the audience, about the losses that haunt his life and the shadow of cowardice he feels as one who “evaded” rather than “resisted” the draft. His parents are dead, his ex-wife is dead, he is estranged from his nineteen-year-old daughter. He may ruminate and reveal his regrets to himself, but he is incapable of disclosing a piece of himself to anyone else.

Arthur’s shop has just been vandalized: glass smashed, “Pussy” spray-painted on the wall, but nothing taken. Max (Ron Bottitta), the Russian owner of the DVD shop next door has reported the damage to the police. Arthur is not there. He is often late in opening, whereas the eager immigrant shopkeeper, who wants to acquire the donut shop so he may expand, is the classic immigrant striving for the American dream.

When Arthur finally shows up, and Max and the police are gone, he sits alone amid the wreckage in a marijuana fog, store closed, door locked. He has a help-wanted sign in the window and Franco Wicks (Edi Gathegi), a street talking African-American kid, insistently knocks upon the door until Arthur reluctantly opens it. Cocky Franco is a bundle of high energy who does not take no for an answer. He has dreams he can cook up in a minute and a large vocabulary that seems at odds with his persona. He can even sell Arthur on the idea that he should give him a chance to prove himself. Franco cannot single handedly lift Arthur from his own shadows.

That just about gives away the first 10 minutes of this two-and-a-half-hour production. The real fun is in the relationship between Arthur and Franco. What at first feels like a sit-com develops into revealing and often very funny dialogue. Once Letts gathers steam he has a way with repartee in which each character maintains a distinct and separate voice. Franco does not loose his can-do spirit and Arthur’s depression resists any effort at being dispelled. Gathegi’s six-pack abs, which he proudly shows off to Arthur, is an apt symbol of his taut timing and youth. He embodies the energetic street kid you want to help. Cole is convincing as the chronic depressive whose glass is always less than half full, but who would defend himself as a realist. As an aside: there is research showing that depressives are generally more realistic than optimists, but that optimists achieve more because they are not dissuaded by reality. They keep trying. Cole’s portrayal of Arthur is well informed. Reality is always there to haunt him.

Because “Superior Donuts” is not a sit-com, Letts tries to avoid the sugary finish. Early on Franco boasts without irony that he has written the great American novel, “America will be …” which happens to be a quote from a Langston Hughes poem. The ethnicity of each character in “Superior Donuts” is integral to his persona, his perception of himself and his perception of others. Each comes up short of his own view of the American dream.

Act II indeed avoids the sugary, but unfortunately it fails to provide satisfying substance. Tragedy, prompted by a large debt Franco owes a bookie, erupts into an interminable fight. Somewhere between an amateurish depiction of violence and slapstick, Director Randall Arney allows it to go on far too long. Whatever tension has built up is dissipated, and Letts’ denouement looses credibility.

Letts won almost every prize for his last drama, “August: Osage County.” In its wake, audiences across the country have flocked to “Superior Donuts.” While “Osage County” was tragedy sprinkled with the comedic, “Donuts” cannot quite decide what direction it is going. At its best “Superior Donuts” is intelligent, witty, and thoroughly enjoyable. When the tragedy goes from the implied in Act I, to the over wrought in Act II, it overwhelms the story.