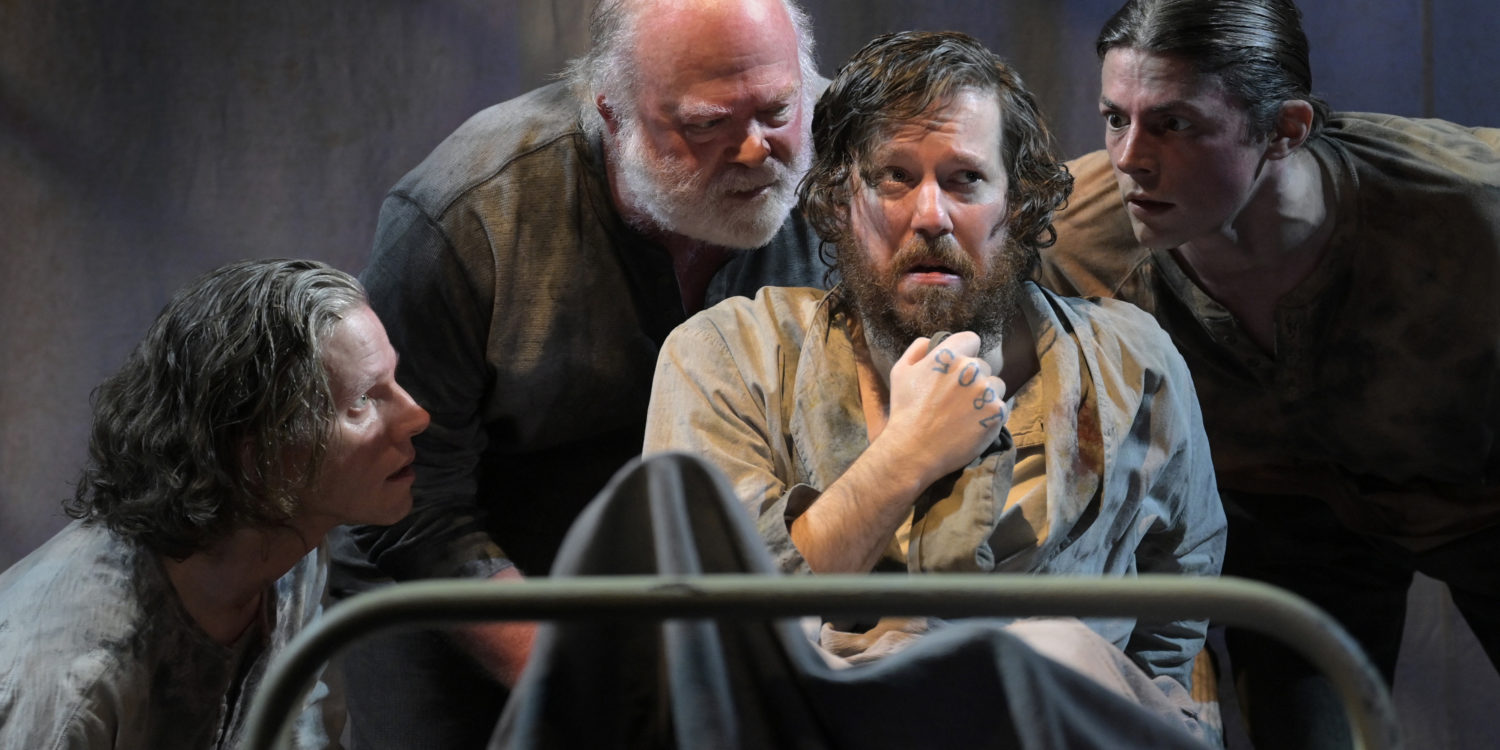 The world premiere “Swept Away” is the tragic tale of four starving shipwrecked sailors — and it’s a musical. But put aside your mental image of suffering seafarers in top hats dancing and singing like a nautical version of “The Producers'” “Springtime for Hitler.” “Swept Away,” accompanied by music by the North Carolina folk/rock band, The Avett Brothers https://www.theavettbrothers.com/, is one of the most original and mesmerizing pieces of dramatic musical theater I’ve seen in a long time.
And this production has been a long time coming. Initially planned for June 2020 and postponed too many times because of Covid, “Swept Away” is worth the wait. And if anything, living through a pandemic adds in a small way to our appreciation of the struggles of the sailors.
The taut and tension-filled “Swept Away” follows four survivors of an 1888 sunken whaling ship off the coast of New Bedford, Massachusetts. To add to the play’s realism, the stage at the Rep’s Peet’s Theatre is covered by the deck of a realistic ship, down to the shrouds and lines and the rolling motion of the ocean.
Two of the four sailors are young Southern farm boys away from home for the first time, with Big Brother (Stark Sands), sworn out of a sense of religion and duty to protect his adventurous Little Brother (Adrian Blake Enscoe). The aging, disgruntled Captain (Wayne Duvall) recognizes that the day of the whaling ship is ending, but he perseveres. The last of the quartet is the Mate (John Gallagher, Jr., “Spring Awakening,” “American Idiot”), a self-described pagan devil without love or grace.
The hard-hewn sailors, especially the soulless Mate, besmirch the deep religious beliefs of Older Brother. The conflict between the religious tenet of caring for others versus looking out only for oneself comes to a head when tragedy strikes. A sudden squall dramatically overturns the ship as we watch the ship disappear (and rise up in the rear of the stage to form the sky). The four survivors are plunged into a small wooden lifeboat, alone and adrift in the mid-Atlantic, sans food and water. As the days go by and help fails to arrive, the four face excruciating life and death choices. No one in the audience can sit passively without thinking about how they would act in that agonizing situation.
The honest and unpretentious down-home inspired lyrics and music by The Avett Brothers are often poetic, moving, and beautifully sung. The tunes were not written especially for “Swept Away,’ although some songs were reworked for the play. Many numbers are from The Avett Brothers’ 2004 concept album, “Mignonette,” which is about a shipwreck. Yet the music seems to hit the right mood; just don’t expect the lyrics to mirror the plot or move it along all the time.
The accomplished and talented cast’s first-class singing, dancing, and acting complement the pleasingly melodic music. In fact, every aspect of the production is top-notch. The innovative book is by playwright John Logan (“Moulin Rouge!,” Tony-winning for “Red”) and screenwriter (“Skyfall,” “Gladiator”). The on-point direction is by Michael Mayer (Green Day’s “American Idiot,” “Hedwig and the Angry Inch,” Tony-winning for “Spring Awakening”). And since it’s Berkeley Rep, the scenic design (Tony nominee Rachel Hauck), lighting (Kevin Adams), and seascape sound effects (Kai Harada) add immeasurably to one’s enjoyment of the performance.
There was hardly a wrong note or inappropriate line in “Swept Away.” What can I say? With a spellbinding plot and marvelous acting and music, I was swept away.
Swept Away is 90 minutes long, with no intermission. Proof of vaccination and wearing a mask are required. Tickets ($37-$186) can be purchased online at www.berkeleyrep.org or by phone at (510) 647-2949.
This article originally appeared on Berkeleyside.
By Emily S. Mendel
© Emily S. Mendel 2022 All Rights Reserved
emilymendel@gmail.com