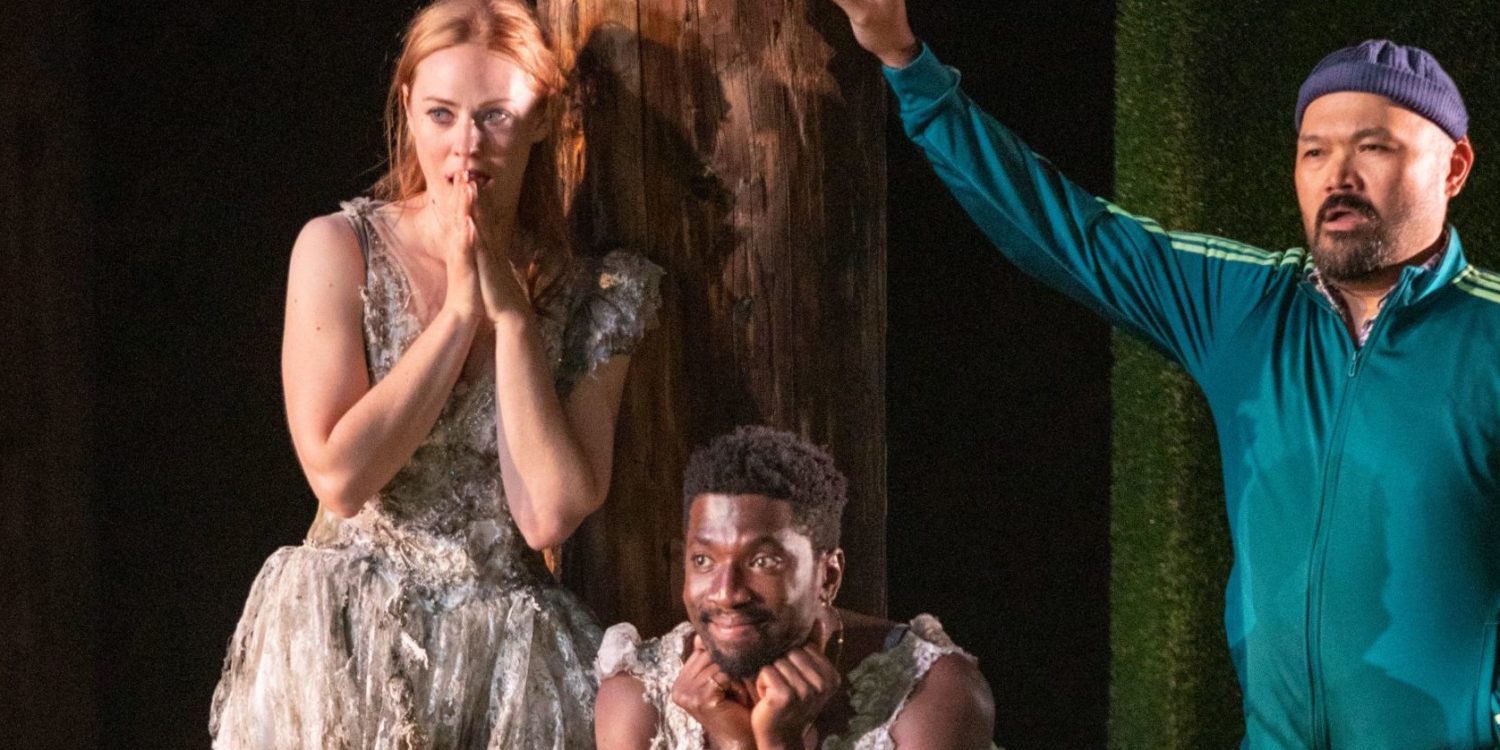 Deborah Ann Woll as Katherine, James Udom as Petruchio and Orville Mendoza as Grumio in The Taming of the Shrew.

Taming of the Shrew

Set in Padua, Shrew tells the story of Baptista’s (Armando Durán’s) two daughters: Bianca (Cassia Thompson) and Katherine (Deborah Ann Woll). Bianca has multiple suitors but Baptista won’t let her marry before Katherine, who has no suitors. Petruchio (James Udom) shows up and vows to wed Katherine, freeing the rest to fight for Bianca. There are plots, complicity, an identity switch and other complications to seal the deal for Bianca’s love.

The cast is wonderful but the production is the star. Singing and dancing break out frequently, and there’s a consistent, half-bawdy style of motion best exemplified by Gremio (Jesse Perez), who slinks and dances around the stage. I could watch Perez walk for three hours and be entertained.

Cooper also plays with the cadences, stressing particular words to amazing effect. Remember reading Shakespeare in high school, flipping to the glossary and thinking: ‘Okay, that’s funny, I get it now.’ Between the movement and the speech, little is lost to translation.

The set and costumes seem taken from some 1960s Miami Beach fever dream, with oddly suggestive topiary and plant-covered buildings. Hortensio (John Tufts), one of Bianca’s suitors, spends the entire play with his shirt completely unbuttoned.

Shrew is problematic because of the blatant misogyny: Petruchio does everything but waterboard Katherine to get her in line. The show tries to get around this by depicting their shared suffering. It doesn’t make the issue go away, but it does become a bit more palatable.

More than anything, it’s the chemistry between Woll and Udom that makes this relationship work in a contemporary context. They may be unusual newlyweds, but they’re still trying to figure each other out. Does it make any sense that they could develop mutual respect? Not really but who cares?

This rendition of the play was first produced at Hudson Valley Shakespeare Festival in 2018, where Globe artistic director Barry Edelstein saw it and was suitably impressed. He helped bring this scaled-up version to San Diego, and thank you.

Between the movement, the music, the costumes (the characters switching costumes), the set and everything else, this version of The Taming of the Shrew is more screwball comedy than high art. Being a complete sucker for physical comedy, I’m still laughing.

Playwright James Ijames was awarded a Pulitzer Prize earlier this year for his play ‘Fat Ham’ which was a virtual...
Theater

Two guys from Cleveland yammering away about LeBron James and the Cavs. For the better part of two hours. Now...
Theater