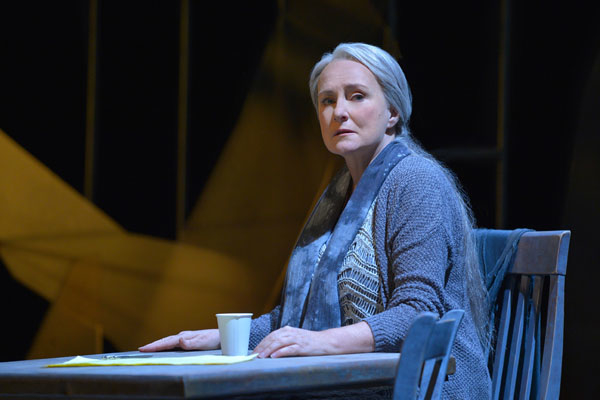 Jesus, Mary and Joseph! No, I’m not swearing, that’s who this play is about. Multi-award-winning Irish author Colm Tóibín’s “Testament” turns the Gospels on their ear by recounting the events leading up to the Crucifixion through the eyes of the martyr’s mother (here known only as “The Woman”).

What a tour de force part for an actress this is. And what an actress plays it at A.C.T. in San Francisco (Fiona Shaw did the Broadway version to great acclaim). Veteran Ontario Stratford Festival performer (Seana McKenna [“Napoli” and “Phedre” at A.C.T.] does a beautiful job, alone onstage with only Alexander V. Nichols’ masterful lighting, a few, occasional chords of music and Tóibín’s poetic script to help her through this riveting 90-minute monologue. It’s enough.

We all know the story — or think we do (I can’t imagine that Tóibín’s version found much favor with the Catholic Church). But the understated, realistic and yes, sometimes humorous, way in which McKenna tells it, from the point of view of a mother whose son has grown too big for his britches, is a radical departure. The Woman also casts doubt on pillars of dogma such as the Deposition (she claims that she fled, fearful of her own life, before her son actually died and was on the run before He was taken from the Cross) and the Virgin Birth (“I know what happened,” she says with a twinkle in her eye). Guarded by two unseen “Minders” who pester her daily by comparing her memories with what they have decided to write down, she is determined to stick to the truth — as she claims to have witnessed it.

The changing of water into wine at Cana may have been a charlatan’s trick, she implies. The raising of Lazarus, to which a great deal of time is given, is more problematic. The relationship between mother and son — they reconnect briefly at a wedding — is strained. It’s almost as if He does not know her and she barely can relate to the grand personage He has become. It is clear that Mom does not approve of her only child’s newfound status and rock-star popularity.

It plays out on a black and white cobwebbed set (also by Nichols) that is as stark as the story. Carey Perloff directs with a sure touch.

Only one false note creeps in at the very end. The Woman, who rejects her son’s new religion as expounded by His radical followers and, although a Jewess, hasn’t set foot in a synagogue in years, wanders into a Greek temple and turns into an ardent worshiper of the goddess Artemis. Why? Perhaps her exile is in Greece. Perhaps she really does take comfort in this new form of prayer. Or perhaps the author, figuring he had given us enough apostasy for one evening, needed to end the work on a note of religious ecstasy. But, on this no-nonsense, practical woman the garments of faith don’t quite fit. Sometimes, even with the best of plays, it’s a little hard to get offstage.