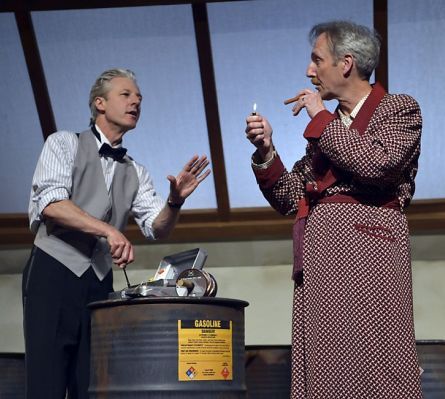 Didn’t your mother tell you not to play with fire? Well, maybe Mr. Biedermann’s mother forgot. Biedermann (a perfectly cast Dan Hiatt), the hapless protagonist of “The Arsonists,” Max Frisch’s funny/frightening parable about the wages of appeasement, fiddles around with flammables until he gets good and burned, along with everybody around him.

The parallels with WWII would be pretty obvious, even if one of the arsonists, a suave, amusing Tim Kniffin as the ex-headwaiter, ex-con Billy, didn’t go around whistling “Lili Marlene” as he makes his incendiary plans. Playwright Frisch, a Swiss national who served in that war, originally wrote this play as a journal entry following the Communist takeover of Czechoslovakia in 1948 and re-worked it as a full-length stage work in the early 50s. Perhaps a little careful himself, he denied that it had any political significance, but acknowledged it as a cautionary tale.

Fires have been breaking out all over town. The papers are full of it and rumors abound. “Lock your doors,” blare the headlines. “Don’t trust strangers.” Biedermann, an uptight, upright citizen, who seeks a quiet, decent life, thinks of himself as a nice guy (although he can be quite ruthless in business, especially to a former employee and his widow – after the poor man sticks his head in the oven). So, when a burly, uncouth homeless man with a sob story comes to his door, he hasn’t the heart (or the courage?) to turn him away. What starts out as a handout of food turns into a room in his attic for the night…and the next night…and the next. Soon the man, Schmitz, a very funny Michael Ray Wisely as the houseguest from hell, brings in his friend Bill as a roommate and the two of them are running the joint. “One day the rumor walks in the front door,” intones the chorus.

Their host is in denial, despite the misgivings of his wife (Gwen Loeb as an airhead shopaholic) and their down-to-earth maid, Anna (Dina Percia). Things begin to heat up— quite literally— when Biedermann discovers oil drums full of gasoline plus fuse wire and detonators in the attic. But, cowardly to the end, instead of ousting the intruders or calling the police, he invites them down for a nice dinner.

It’s all very funny until it isn’t anymore.

The Aurora production, directed by Mark Jackson, is slick and smooth, the actors excellent, especially Hiatt, Wisely and Kniffin, who steals every scene he is in. There is a possible objection to the use of a trio of inept firefighters who act as a Greek chorus (even uttering “Woe is me” frequently). It lends an air of unreality to the proceedings that, while it may have been the intent, distances the audience from the tale. Another (minor) character, a professor, played by one of the firemen, seems to be there for no discernible reason.

But these are quibbles, placed against the savage bite of the satire, the excellence of the production and Nina Ball’s sleek modern living room set into which giant oil drums will descend from the flies. Kudos as well to lighting designer Stephanie Buchner and Matt Stines’ sound. If you decide to hang out with “The Arsonists,” you’ll probably have a bang-up time.