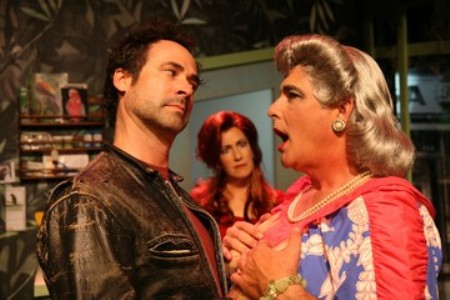 Your Honor, may it please the Court. The defense is willing to stipulate to the prosecution’s contention that Charles Ludlam is a funny—indeed, a very funny—playwright. We also will stipulate the additional contentions that Mr. Ludlam was well acquainted with the novels “Double Indemnity” (Exhibit A), “The Postman Always Rings Twice” (Exhibit B) and “Monty Python’s Flying Circus sketch The Dead Parrot” (Exhibit C) and that he drew upon all three for his “Artificial Jungle” parody.

But the defense will show that defendant Ludlam did not plagiarize these works so much as he ridiculed and lampooned their plots and their characters in his own unique style.

Whereas in “Indemnity” and “Postman” the protagonists are intrinsically evil, intent on committing fraud, lust and murder, and, in “Dead Parrot,” scamming, Mr. Ludlam’s characters are bumblers and stumblers whose only crimes are incitements to laughter.

Defense will call the late Chester Nurdiger (Rich Hutchman), owner of The Artificial Jungle pet shop, to the stand and ask him if he ever noticed, while he was servicing the shop’s animals, that his bored and sexually frustrated wife Roxanne (Bernadette Sullivan) was actively looking to service almost any man other than himself. We ask the Court to caution the jury not to be swayed by her looks (she is a babe) or her broad characterization of a broad.

We will also show that Zachary Slade (Michael Loomis), hired by Mr. Nurdiger as an assistant, was indeed so—swayed—by Roxanne that he readily agreed to be of service to her. This involved not only helping her care for the shop’s birds, reptiles and fish but also for taking care of her various needs.

First and foremost was her need for… anyway, her second most urgent need was getting rid of her husband and disposing of his remains after duping him into signing an insurance policy. Defense would again ask the Court to instruct the jury not to giggle when that disposal method is disclosed.

The defense is considering summoning the older Mrs. Nurdiger (Michael Halpin), Chester’s mother/Roxanne’s mother-in-law, and Frankie Spinelli (Brad David Reed), Chester’s friend, to testify about Roxanne and Zachary’s shenanigans, although both appear to be nitwits, oblivious to everything that happened around them.

Defense believes that once the jury has heard and seen all the evidence in this case, it will return a guilty verdict, not of murder, but rather of premeditated laughter in the first degree. We can live with that.

Exhibit A: “Double Indemnity,” a 1935 novel by James M. Cain and a 1944 movie directed by Billy Wilder, deals with a wife who seduces an insurance salesman to kill her husband but to make it appear to have been an accidental death.

Exhibit B: “The Postman Always Rings Twice,” a 1934 novel also by Cain and adapted to no less than five films, involves an adulterous young wife and a drifter who conspire to kill her older husband and take over his diner.