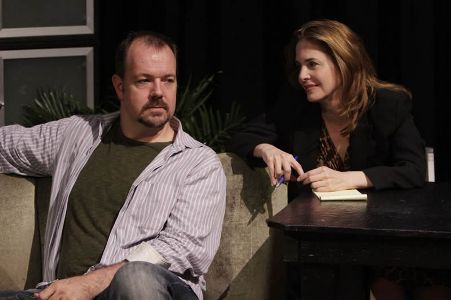 We have lived through, and survived, many “ages” — the Dark, the Enlightenment, the Industrial, the Space, to mention just a few — and we find ourselves today grappling with the Digital. Arguably, the last has provided as many or more benefits than earlier periods.

Also arguably, it’s not without its drawbacks, from the petty (“your call is very important to us”) to the serious (hacking; phishing) to the infuriating (politics; Wall Street; corporate arrogance). Most of us, when we encounter such irritants, vent and get on with our lives.

Jack has lost whatever job he once had and now sits all day long before his computer, composing jeremiads against the Bank of America and other scourges of today’s world. In vain does his wife, Molly (Marshelle Fair), coax, scheme and nag him to seek employment. Even when offered a so-so job by Derek Coles (Kevin Benton), a colleague of Molly’s, Jack refuses; he’s hunkered down in anger and self-pity and is content to stay there.

It’s only when his drinking buddy, Grant Lerner (Michael Monks), encourages him to talk with a therapist, Dr. Wendy Bellflower (Stephanie Erb) that Jack cautiously emerges. Grant has been involved with Bellflower previously, although he urges Jack not to let her know that he’s told Jack so. She’s bright, cheerful, attractive and decidedly unconventional. No, make that a whacko; she seems intent on doing as much damage to her clients as she is doing, and has done, to herself.

It’s at this point, where Jack enters therapy with Bellflower, that the play gathers speed. But it’s the speed of a car with bald tires on an icy road: it skitters and slides all over the place. Yes, it’s scary and, yes, it’s often wickedly funny — but playwright Bloch loses control of his vehicle and, despite Nagel’s convincing performance as a troubled man, it crashes into implausibility.

Director Bryan Rasmussen nevertheless expertly steers the cast of five performers through their twists and turns, although he would do well to encourage Ms. Fair to deliver her lines with a bit more oomph; it was often difficult to hear her, even though the Whitefire — now celebrating its 30th year of artistry — is small (even by 99-seat standards) and cozy.

John Burton’s set is an inventive triptych on the Whitefire’s small floor: a readily-recognized therapist’s office, stage right; a table in a bar, down center; and Jack and Molly’s home, stage left.