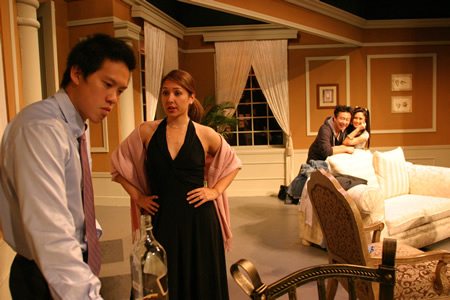 How best to view The Best Man? As a fresh new work or as homage to Who’s Afraid of Virginia Wolf? Start with two couples: one couple younger, one couple older and a swelling undercurrent of domestic and sexual war games. Stir in the ‘elephant in the room,’ an unseen child who is shadowed in fantasy and meaning but forbidden a mention. Add impotence, references to a powerful father, an older women who is a provocative master of crushing repartee, an older man who is a failure in his career and, by implication, in his life. Whip the mixture up with late hours and large quantities of alcohol and you have the basic elements of either story.

It does not matter that in the original the couples were aligned differently. Albee’s George and Martha had years of marital practice and were the center piece. In The Best Man the older man from one couple and the older woman from the other turn out to be the central force; in this case older equals 30.

Playwright Weiko Lin has taken these ingredients and told his story in the context of young Asian Americans, though, in truth, ethnicity did not play a significant role.

It is the night before his younger half brother, Mitch (Leonard Wu), is to be married and Danny (playwright Weiko Lin), has invited Mitch to his hotel room for a bachelor party. The two have not spoken in over a year. Like George in Virginia Wolf, Danny has a dark secret in his past. MBA Mitch arrives stiff in a suit and tie wanting no part of a bachelor party. He has promised his fiancé he will not drink this evening. Ne’er-do-well Danny, already sloshed, pushes liquor on Mitch and tells his brother that his own girlfriend and another girl will be joining them soon. He insists that Mitch stay at least to meet the girlfriend, Misty (Cathy Shim), a very young “dancer” whom, it turns out, Danny pimps thereby being able to afford this fabulous New York hotel suite this fabulous New York hotel suite – this piece of information does nothing to soften or loosen up Mitch.

The door opens and tiny young Misty, tottering on three inch heels, jeans painted on to her butt, spilling out of her tight tee shirt and laden with packages, bursts squealing into the room, throwing herself luridly at Danny. The surprise girl turns out to be Mitch’s fiancé, Julia (Lisa Faiman). Julia prickles from the start. She is the “older” woman in this case. Although she too had promised not to drink this evening, defying her fiancé, Mitch, and egged on by Danny, she drinks heavily. As time passes and liquor flows her bitchiness grows. It is obvious that the emotional tie between herself and Mitch is weak. However she and Danny have a shared past that is far from buried. A la George and Martha in Virginia Wolf they parry and spar drawing the other two in. Battle is the glue that makes them inseparable and the at all play interesting. The other two are stuck between them.

In Virginia Wolf, Albee had a mature and highly educated couple who dug at each other with rapier wit. Danny, a pimp and a wanna be D.J., and Julia, a rich daddy’s girl, would be pulverized by George and Martha and their years of perfecting their games. Danny and Martha are just not as interesting as George and Martha … maybe in twenty years, but not now.

There are some surprises that would be unfair to reveal, but the concept and the actors are more interesting than the characters. Lin, as Danny, does drunken anguish wonderfully. His pain and emptiness are barely below the surface and seep through gradually. Unfortunately, on the night being reviewed, he seemed to have developed a cold toward the end of the evening rending an articulate actor into an almost completely unintelligible one. Faiman did bitchiness so well you would hate to meet her in a dark alley or have her seated next to you at a dinner party. And Shim had the needy eighteen year-old runaway turned stripper/prostitute to a tee: the false gaiety, the indiscriminate reaching for love and acceptance, and the over-the-top sexuality. Haibo Yu’s set nailed the understated hotel suite you would love to have in New York but will not spring for.

Despite the excellence of the production and some original plot twists, Wh’so Afraid of Virginia Wolf need not fear The Best Man’s replacing it in our hearts. Albee is a tough act to follow but Lin’s writing is strong enough he should not shy away from originality in the future. Being freed from another author’s constructs would free him from forced plot elements that only make real sense when you refer back to the original.