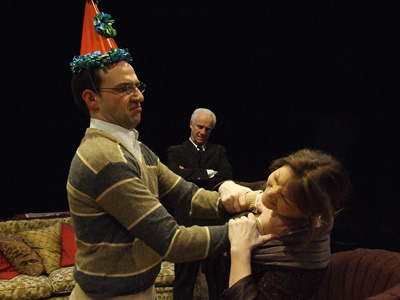 There’s more to Buffalo than chicken wings, impressive architecture, and the birthplace of alternating current. OK, so that last one was big. Buffalo, a well-kept- secret-of-a-town, is also a theater town and the Irish Classical Theatre Company (ICTC) is largely the reason why. Started by Vincent O’Neill and the late Chris O’Neill in 1985, the ICTC puts Buffalo on the national map.

Harold Pinter’s The Birthday Party is a linguistic feast for the absurd leaning heart. The complacent life of seaside boarding house owners Pety and Meg and their one overgrown baby-of-a-guest Stanley is disturbed when two strangers, McCann and Goldberg, come to collect Stanley. Somewhere in the middle they decide to throw Stanley a birthday party to die for— quite literally so, in the case of femme fatale Lulu who ends up possibly deceased at the end of Act II. Just so you don’t get too sure of yourself, Pinter brings Lulu back unharmed in Act III. Shards of a narrative form enough of a story to undermine the fact that at no point do we ever know what’s really happening in Pinter’s fractured world. Don’t get to comfortable; there’s nothing to hang your truth-seeking hat on whatsoever, although much will feel like the world-in-collapse at our door step.

Pinter is in good hands at the Irish Classical. Under Greg Natale’s keen direction, Pinter’s glorious games of pun and cliché soccer goes full throttle amping up the hilarity big time. (Yes, existentialists can be funny too.) Natale gives ample space and rhythm to the poetic banter that diffuses the pervasive sense that something catastrophic may occur at any minute. Otherwise, Natale keeps the pace brisk, building a momentum that stays true to Pinter’s all-encompassing climate of fear, impending doom, and the brutal unknown.

The cast—all superb—handle Pinter’s prose with care and delicacy. ICTC veteran Josephine Hogan’s cornflakes-for-brains Meg is off the charts on the daff-o-meter. Hogan’s perky timing in the opening sections sets the tempo for everything that follows. Her loopy optimism frames the play. Gerry Maher’s crusty portrayal of Petey, the clueless inn and lounge chair keeper, works like a balm amidst the building chaos. But it’s O’Neill’s slick but slimy Goldberg that creates the matrix for the entire production. He’s one sexy thug, possibly dying of some unnamed affliction (I’m going to guess a pesky bout of pancreatitis), out for one last caper. Guy Wagner as the tightly-wound sidekick, McCann, captivates in his highly precise moves and impenetrable stare. O’Neill and Wagner pound out the interrogation scene like a couple of practiced pros. The two are a study in contrasts, with the uptight McCann soothing himself by tearing paper as if he’s performing surgery and Goldberg’s rogue cowboy-with-a-past act. The bit when Goldberg asks McCann to breathe into his mouth lends a surprising touch of eroticism and Natale gives the scene its full glory.

Todd Benzin’s ticking-bomb Stanley is spot on and Leah Russo’s Lulu plays off the surrounding lunacy with saucy style. Benzin gives Stanley the full bloom of a disaster waiting-to-happen. Scott Behrend’s homey set contains just enough oddness to keep the off-kilter feeling strong. Suspended fragments of window frames made for a potent symbol of incompleteness. With Pinter, the unseen gets equal time with the seen.

So what should we make of Pinter’s subversive Birthday Party? Well, we could take the heady approach and pick up a copy of Sartre’s Being and Nothingness and a good bit of Ionesco, Genet, Beckett, and Ablee and place Pinter in the cannon of The Theater of Absurd. Or not. There’s no need to be a card carrying existentialist to enjoy Pinter. He’s the most accessible (or at least tied with Albee) of the lot. By crafting his plays from the familiar, Pinter welcomes us in at any door we choose to enter. He lulls us with language we know and have spoken before he pulls the rug of our complacency out from under us. It’s one wild ride and the ICTC makes it fun and more than a bit disturbing. But isn’t that why we go to the theater?

O’Neill generously led a “question and answer as best I can” session afterwards. “Huh” type questions evolved into more authoritative interpretations. Pinter’s all about having perception complete the experience. That said, what better match to a steely cold Buffalo Sunday afternoon than a strong dose of well-produced Pinter.