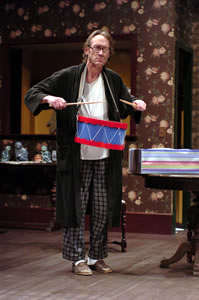 James Carpenter in The Birthday Party

It’s not your ordinary birthday party, the kind with candles and cake. Stanley Weber’s birthday party is downright scary, drunken and filled with menace. The fact that Stanley denies that it is his birthday at all just seems to fuel the party’s incendiary promise. It’s fascinating to watch but you’re glad not to be one of the invited guests.

Nobody can do enigma better than Harold Pinter (unless you count Samuel Beckett) and it is rather amusing to walk out of “The Birthday Party” at Aurora Theatre in Berkeley and watch the other patrons scratch their heads in bewilderment. My advice: don’t worry about what it means, just enjoy the ride.

If nobody does enigma better than Pinter, there are few who do Pinter better than Aurora’s Tom Ross. This is the fifth Pinter play the Aurora artistic head has directed and he has it down cold. A superb ensemble, headed by James Carpenter as the unfortunate birthday boy and Julian Lopez-Morillas as Goldberg, his nemesis, delivers the Nobel Prize-winning playwright’s lines as if born to them.

The setting is a seaside resort in Britain. In a second-rate boarding house (Richard Omsted’s shabby-genteel design) live Meg (Phoebe Moyer), the talkative, childlike, slightly dotty landlady, her taciturn husband Petey (Chris Ayles) and their lone tenant, a has-been piano player (Carpenter) who spends most of his time hiding in his room and the rest of it verbally abusing Meg, who has an obvious crush on him. Is it a mother-son fixation or did they once have an affair, as is hinted in one of Meg’s lines? Just another of the unanswered questions among the many this play presents.

Their placid boring lives, marked by corn flakes, fried bread and bad tea, are interrupted by two mysterious men, Goldberg and McCann (Michael Ray Wisely), seeking a room for the night. From the moment of their entrance – and even before – it is clear that this is what Stanley has been hiding from. He even seems to know Goldberg, the smooth talking front man, if not McCann, the hatchet guy. They interrogate him viciously and this scene is the basis for the play often being described as a statement about totalitarianism, either in government or religion. Are they terrorists or evangelists? Or maybe the pair represents society, wanting to rehabilitate and reclaim one of its deviant members. Or maybe they are representatives of some loony bin, seeking the return of Stanley, who definitely has his loony side. Or maybe Stanley has crossed some invisible criminal line and there is a contract out on him. Part of the fun is, we’ll never know. But after that, Stanley is never the same.

An old-fashioned three-acter, “The Birthday Party” has the second act, the actual party at its core. Petey (the only truly decent character in the play) is absent, having gone out for his weekly game of chess. Lulu, a delightfully sluttish Emily Jordan, is the only other guest. Stanley, alternately exasperated and terrified, participates only reluctantly. A couple of bottles of Scotch, a bizarre game of Blind Man’s Bluff and a beautifully-rendered Irish ballad later, the lights go out, leaving all in chaos and confusion.

Act Three almost is anti-climactic. Hey, even Pinter isn’t perfect. The play closed shortly after its 1958 premiere due to critical disdain. Another flaw is Goldberg’s sporadic outbursts of Jewishness – probably an homage to the playwright’s own roots. Somehow the phrase “a nice piece of gefilte fish” doesn’t sound at home in the mouth of this dapper but lethal mobster. Or maybe, as the program suggests, Goldberg and McCann stand for two of 1950s England’s persecuted groups, the Irish and the Jews, (later to become the Pakistanis and the Indians.)

Who knows? If it is true that there are no good answers, only better and better questions, who cares? In the end, the bad guys lead the stunned Stanley away but Petey’s farewell, “Don’t let them tell you what to do, Stan,” leaves some hope for the unknown future. “The Birthday Party” is not a particularly comfortable piece of theater, but it is a fascinating one.