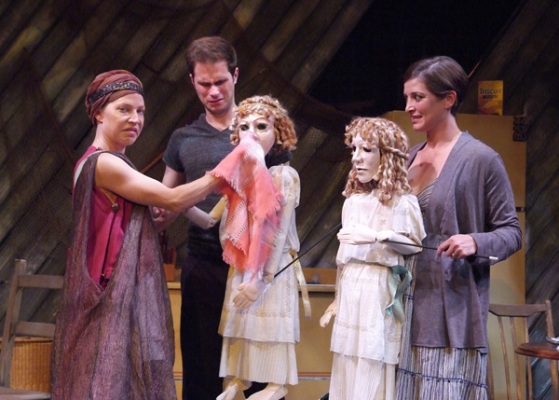 If you brushed up your Shakespeare before seeing Cole Porter’s “Kiss Me, Kate,” a musical spoof of the Bard of Avon’s “Taming of the Shrew,” then you’d be equally well advised to brush up your Euripides’ “Medea” before seeing “The Children.”

You might also want to refresh your memories of some episodes from “Seinfeld,” “The Muppets” and, perhaps, even a bit of David Lynch, because writer Michael Elyanow mashes up ancient and contemporary instances of “maternal filicide” — mothers who deliberately kill their own children — and leavens it, a bit, with some funny one-liners and comedic action.

Euripides, of course, gave us Medea, the wife who endured so much for the sake of her husband Jason’s quest for the Golden Fleece, only to be cast aside for the highborn princess Creusa. No shrinking violet she, Medea then proceeded to murder her rival and her own two sons to wreak a terrible vengeance upon Jason for his betrayal.

“The Children” takes place in the present (presumably to acknowledge that filicide still happens), in a beachfront house in Athens, Maine. There on the rocky New England coast, a Greek chorus member from the Euripidean play, simply called the Woman of Corinth (Adriana Sevahn Nichols), Medea’s Nursemaid (Jacqueline Wright) and Medea’s two young children find themselves mysteriously Twilight Zoned some 2,500 miles and 2,500 future years from their ancient Corinth.

The women are bewildered by their strange new surroundings and the intrusion of the local sheriff (Daniel Blinkoff) who is intent on evacuating them from an approaching hurricane, but are nonetheless determined to protect the children — a boy and a girl, in Elyanow’s telling — from their mother’s murderous rage.

Add to that some truly funny touches — the sheriff is puzzled by the women’s Grecian gowns before concluding they’d been attending a nearby “Reni (Renaissance) Faire;” the Corinthian woman returns from shopping with a plastic CVS Pharmacy bag and a most “unusual torch” (a flashlight) and later describes Medea’s book of charms, spells and incantations as “a perfect summer read.”

That’s about as much of the intricate, sometimes confusing, plot as you need.

What you do need to see and hear, however, are Francois-Pierre Couture’s scenic design — the undulating, gauzy, full-stage white curtain at the end of the play will have you thinking you are the one drowning in the sea — and Veronika Vorel and John Zalewski’s realistic, precisely timed sound environment, along with Susan Gratch’s puppets, Jaymi Lee Smith’s lighting and Tina Haatainen-Jones’ costumes.

Presiding over all this talent, pulling it all together and deftly setting it before an appreciative audience is the director, Jessica Kubzansky. After the play, she discussed with the audience the give-and-take that occurred during rehearsals between herself, author Elyanow and the cast to make “Children” a compelling theatrical event.

Nice work if you can get it, as that old song goes, and she and the Boston Court crew, indeed, got it.