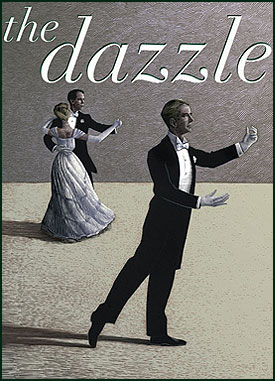 In Richard Greenberg’s fascinating and flawed new play, The Dazzle, the central character, Langley Collyer, seems to be a direct descendant of some weird Swiftian creation. Collyer has a whole mansion that he fills with the things (here, imagine "things" in neon letters four feet high) that are his totally engulfing obsession.

Reg Rogers, one of the New York theater’s strongest, most versatile actors, portrays Collyer, a name that will be familiar to anyone even mildly interested in the history of obsessive eccentrics. With his brother, Homer, Langley Collyer filled a Harlem mansion with, among many other things, tons of old newspapers, numerous pianos, and the chassis of a Model T Ford. When both men died in 1947 it took workmen weeks to find the bodies. While playwright Greenberg says he did little research into the lives of the real Collyer brothers, the two characters as he has created them seem absolutely plausible as two weird old coots who would end up as the Collyer brothers did in life, and as they do in the play.

But these fictional Collyer brothers are much more than strange old coots; the play presents them as two fascinating characters, each with his own debilitating obsession/compulsion, but also with the gifts of expressive language and penetrating, if wildly limited minds. Greenberg creates their relationship and their world in such a way that their step-by-step spiral downward is utterly believable and eerily familiar. How many audience members will go home from the play and begin to eye that hall closet full of valuable stuff that just can’t be thrown out, but also can’t be clearly remembered or named?

The brothers begin their tragic spiral near the top-plenty of family money, a promising career as a concert pianist for Langley, with Homer serving as his manager and companion, and with both men moderately pleased with this arrangement. Then, scene by scene, their two obsessions take over their lives, obsessions that can be catered to but never truly satisfied. For Langley it is his things, any things, not necessarily interesting things or beautiful things, but immensely valuable as long as these things have a corporeal reality and can be possessed, brought home, kept, stared at, appreciated for their fabulous thingness. Homer’s obsession is less striking, but ultimately just as dangerous: he craves story, desperately wants something to happen, and joined at the psyche to Langley who can sit and stare at a leaf all day, not much happens to Homer at chez Collyer. Homer pushes the plot envelope.

And that’s where the play’s problems come in. There is a third character, Milly Ashmore, a rich young woman with a lousy home life who has become bored with turn of the century society and hangs out with the brothers partly because they are so very different from her ordinary life. With her around things happen, but they are not things that really fit the play. She breaks into the claustrophobic world of the brothers in the first act; then she reappears in the second act in a plot turn that is extremely hard to accept. Although Francie Swift does what she can with this role, the character seems superfluous.

In the two central roles, however, Reg Rogers and Peter Frechette are superb. Rogers, who has appeared successfully off-Broadway in the title role of Cellini and in Unwrap Your Candy, is staking out his territory as one of New York’s best, most versatile leading men. He is handsome in a slightly exotic way, a large man with seemingly perfect control of his body and voice. He is also one of those actors whose thoughts and emotions seem to project directly from his mind and heart clearly and subtly. As Langley, he makes a profoundly weird and eccentric character seem believable and even likeable. Peter Frechette, although playing the less flamboyant and colorful role, is equally powerful. He is, in a sense, Langley’s straight man, but he is much more than that, and it is illuminating to see him create this character that dovetails his own madness so cleverly and so destructively to that of his brother.

The direction, by David Warren, moves the characters–physically and emotionally–through the cluttered world of the play, and eases them past some of its difficult moments, especially in the second act. Set designer Allen Moyer brilliantly creates a world that morphs before the very eyes from an Edith Wharton drawing room with only a hint of the detritus to come, into an overstuffed place that literally begins to crush the bodies and souls of the brothers.

(22086)
$3.99 (as of January 24, 2021 - More infoProduct prices and availability are accurate as of the date/time indicated and are subject to change. Any price and availability information displayed on [relevant Amazon Site(s), as applicable] at the time of purchase will apply to the purchase of this product.)

(18187)
$2.85 (as of January 24, 2021 - More infoProduct prices and availability are accurate as of the date/time indicated and are subject to change. Any price and availability information displayed on [relevant Amazon Site(s), as applicable] at the time of purchase will apply to the purchase of this product.)
related posts