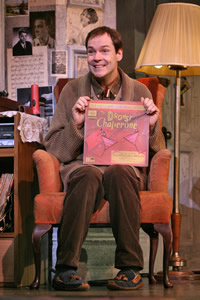 Music and Lyrics by Lisa Lambert and Greg Morrison

has ever been transported by the theater. THE DROWSY CHAPERONE tells the story of a modern day musical theater addict known simply as “Man in Chair”. To chase his blues away he drops the needle on

his favorite LP – the 1928 musical comedy, The Drowsy Chaperone. From the crackle of his hi-fi, the

up show business to get married, her producer who sets out to sabotage the nuptials, her chaperone, the debonair groom, the dizzy chorine, the Latin lover and a pair of gangsters who double as pastry chefs.

This show should have been called, “The Depressed Man Who Loved Musicals”, but that may not have sold any tickets. Of course, “The Drowsy Chaperone” also tells you nothing, and the eponymous character is featured in only a secondary part. Oh well, what’s in a title?

With fantasy tap dancers bounding out of the refrigerator of the sad sack narrator’s gloomy New York apartment and razzle dazzle taking over his living room, this show offers an interesting post-modern sort-of twist on the show-within-a-show. There is an interesting tension between between reality and fantasy, which rescues the audience from the fact that the show in question is nearly intolerable in its 1928-style silliness. What starts to grow on you are the accumulated details escaping almost accidentally from the narrator’s asides, so that by the end, there is a sense of emotional depth to the show that a million dollars of spangles and chorus girls could never buy. The point seems to be that musicals still matter, but this is a unique and hopefully one-time conceit. Somehow, “The Drowsy Chaperone” manages to get away with.

The road company assembled in San Francisco features a sympathetic Broadway veteran “Man in Chair,” Jonathan Crombie, plus a TV star of olden days, Geogia Engle, (Mrs. Tottendale) from the “Mary Tyler Moore Show”, who is exactly the same (isn’t that scarey?). Everyone else is larger-than-life, with bigger than average lung capacity, and no shortage of ham quotient. This is a good musical to attend if you are a rainy day musical comedy listener, if you love brainless vintage song-and-dance shtick, or if you care to see what they have been handing Tony awards out to recently (the show won for book, score, costumes and scenic design in 2006).