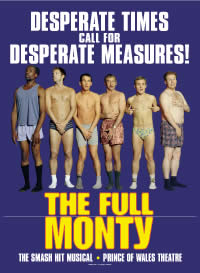 TheFull Monty, an inexpensively made ($3.5 million) "small" film from England, turned into a mega-hit, grossing big bucks ($256 million) for its producer, Fox Searchlight Pictures. Disney has led the way in extending celluloid franchises into the legitimate theater (Sleeping Beauty, The Lion King ) so it comes as no surprise that others would emulate that profitable model. After a sold-out June tryout at the Old Globe Theatre in San Diego (and, it is reported, extensive reworking), Fox will open a full-blown musical Monty on Broadway this month. Based on audience reaction at a preview performance, they will have a popular hit on their hands.

The Sheffield location of the film has been shifted trans-Atlantic to Buffalo, New York, a perfect choice for a story grounded in a setting of industrial economic malaise. Terrence McNally’s book for the show is its strongest point, an intelligent adaptation that succeeds in developing some well-realized characters and plausible relationships, thus engaging audience sympathy beyond the mere titillation a lesser writer might have delivered with this subject matter.

The story (for anyone who may have been isolated in Kazakhstan for the last four years) is about a group of unemployed steelworkers whose only current opportunities are dead-end minimum-wage jobs as security guards or stock clerks. Their resulting idleness and insolvency, salvaged only by working wives, has undermined both their confidence and their manhood. Divorced, Jerry Lukowski (Patrick Wilson) is faced with loss of joint custody of his son because he can’t come up with child-support money. When a professional Chippendales-type male strip show passes through town and draws a big, ladies-only crowd, Lukowski hits on the idea of earning his desperately needed cash by putting on a similar show with himself and his buddies as the dancers. The story line follows the recruitment of the necessary talent, rehearsals, stage fright, the relationships of the men, and it leads up to the fore-ordained climax/finale. The extra wrinkle is provided when the women challenge Lukowski’s idea: Why would anyone come to see a bunch of out-of-shape local guys strip? The answer: They’ll go all the way, strip to the buff – The Full Monty.

The potential for the show to wallow in the obvious opportunities for penis and physique jokes and to rely too heavily on the anticipation of the final flash of flesh, as it were, has been transcended by McNally’s book. While those ingredients are inevitably present, McNally also explores gender issues and gay issues as well as self-esteem and relationship situations, suggesting just enough to inject some substance into the premise, but not so much as to bog down what is never meant to be more than a light entertainment.

David Yazbek’s score is a disappointment. An upbeat, jazzy overture raises hope for the sort of jazz-pop based music that made City of Angels such a pleasure some years back, but Yazbek’s score immediately reverts to generic, rock-pop bubblegum for the ears. It does provide the needed energy for song-and-dance numbers like the opening "Scrap," where Yazbek’s effectively hard-edged lyrics, contrasting workingmen’s lives with their dreams, outshine the uninspired music. The almost obligatory number for the wives, "It’s a Woman’s World," comes over as merely shrill, but "Big Ass Rock," with unexpected gallows humor, works well. As if following a menu of possibilities, a bland Latin number is thrown into the hopper.

Andre De Shields, a well-loved stage veteran, plays "Horse," and he carries a great number, "Big Black Man," that showcases both his slide dancing and his ability to deliver a song, a song that draws laughs by saying things that are not usually said. Even more popular with the audience is Kathleen Freeman, whose extensive television and movie appearances make her face–the most slept-in face since Margaret Rutherford–as familiar as last night’s sitcom. Freeman, who plays bawdy Jeanette, the pianist for the dancers, has great stage presence and skillful timing with a comic line: "For every million toads there’s a fairy prince. You just gotta kiss them all!"

Some of the songs slow things down considerably – but maybe these will be fixed by opening night. Overweight Harold (Marcus Neville) singing to his belly, "You Rule My World," probably worked better on paper than it does on stage. "Life with Harold" was almost but not quite breathed into life by Emily Skinner.

The production, designed by John Arnone, is appropriate and functional without being particularly original or distinguished; unlike lavish Disney productions, this one has the look of a careful corporate budget. But then, glitzy production is not the raison d’�tre for The Full Monty.It all builds up to the grand finale, by which there was an abundance of female squealing from the audience and smiles all around. This is a show that will probably prove to be immune to critics’ opinions. It has a built in constituency that will be buying tickets for years.