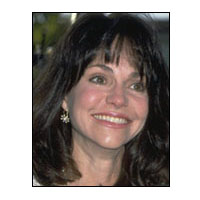 Deserving winner of the 2001 Tony Award for Best Play, Edward Albee’s The Goat is unquestionably the most mesmerizing theatrical experience on Broadway at the time of this writing. With dialogue that crackles like none since Who’s Afraid of Virginia Wolf?, Albee draws a powerful parable that is clear, incisive, and explores its theme in a remarkable range of subtle variations. With brilliance that few working playwrights these days can approach, Albee elicits deep, genuine belly laughs from his audience simultaneously with a profound poignancy that catches in the throat even as the laughing continues.

Six months into its run, the highly praised original cast has been replaced with two new stars. Sally Field, whose film popularity will doubtlessly keep a wide audience coming to the show, surprises the skeptics with a skilled performance as the betrayed wife dealing with a revelation of infidelity that is so outside the pale that she is completely undone. Her delivery of the comical, bitter repartee is timed impeccably and her ultimate scream of anguish penetrates every heart in the audience.

But the more difficult role is that of her husband, Martin, caught up in a crucial emotional and sexual situation that threatens his successful marriage to a woman he loves, as well as the stability of his gay son and his own brilliant career as an architect. He at once feels his world falling apart, rejection by his family and betrayal by his best friend, and, in dead seriousness, the tainting of a love he genuinely feels. It is a more subtly written role than the wife’s–he doesn’t erupt into histrionics, but attempts to rationally explain the inexplicable, justify the breaking of taboo, even as he emotionally comes to grip with the fact (forgive the expression) that the honeymoon is over.

Bill Irwin so subtly realizes this character that the impact of his performance hits gradually, in a slow crescendo of sympathy and disheartening realization. When the dialogue is ironic, his timing with Fields’ could not be more natural, more believable, or funnier. But with the smallest of gestures, with brief flickers of emotion that pass across his face, the pain of his quandary registers deeply. For in his heart, knowing full well the societal strictures that are bringing him and his family down, he believes his love to be true and the taboo to be irrational. Irwin’s is a perfectly gauged performance in which restraint proves to be more devastatingly effective than would be a more full-blown eruption of emotion.

If, in this plot situation, another man is substituted for the lover, the parallels to the experience of gay people in Albee’s scenario are precise. Albee is, after all, a gay writer, and presumably dealt with these issues in his own life. Line after line, response after response will be familiar and ring true to those who have been in a similar situation. It doesn’t take much imagination to carry the parallel further–to interracial marriages, say, or interfaith marriages in communities where marrying outside the community is verboten. By choosing an extreme situation to drive his play, Albee is able both to generate the humor and to register the gravity of his lessons. The Goat is a parable that plumbs the deepest questions of societal constraints on the individual expression of love. It is an opportunity to see brilliant contemporary theater, brilliantly performed.